There are very few things that would drive a man to lead his four children into the forest on a frosty, late winter's night. But as I have since my own childhood, ever since they were able, I've lead my children to see a wonder of nature observed only by the most motivated of naturalists. It is our annual pilgrimage to search for subterranean dwellers on their own migration, a migration that will occur only briefly, yet will ensure that their populations remain viable – a migration to the temporary breeding ponds of the spotted salamander (Ambystoma maculatum). 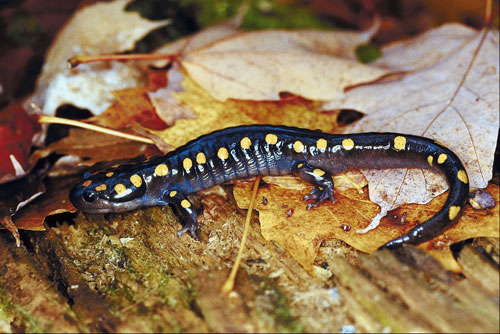 It's not clear why the spotted salamander never really made it as big in the pet trade as its larger cousin, the tiger salamander, but perhaps it has to do with its difficulty to find in nature.

A fairly large species, the spotted salamander may reach lengths of almost 10 inches, with sizes closer to 6 or 7 inches being more typical. Females are approximately one-third larger than males, but individual characteristics do apply. Having a short mouth and head with tiny, protruding eyes, the spotted salamander bears an almost comical appearance. The body is stocky, with a black dorsum characterized by two rows of bright-yellow spots (often appearing orange in southern populations) and sometimes numbering as many as 40, but usually a lot less. Spotted salamanders have a slate-gray ventral surface sometimes lightly speckled with white or blue flecks. The typical 12 costal grooves along the sides are strongly apparent, and the tail is compressed and muscular.
Although there are no known accurate age records for this species, by comparing it to others of its kind, I would guess that it lives for seven to nine years.

For much of the year, the spotted salamander is absent from view. A nocturnal animal, it prefers to move about on cool, moist evenings in spring and fall. It spends the warmer months foraging for small vertebrate and invertebrate prey beneath the forest leaf litter and loose soil, sometimes taking refuge in fallen trees with rotten, soft cores. It is here that the salamander will find grubs and beetles. The salamanders may be found throughout much of the year beneath rotting hay bales or at the center of a compost pile made of vegetation, such as mulch or cranberry leaves.

With its tender skin and clawless digits, the spotted salamander is a weak burrower on its own. As the season becomes excessively dry, however, it will find refuge beneath the ground in damp stump holes and the burrows of other subterranean creatures, such as moles and shrews. It is here the spotted salamander spends cold winters, hiding beneath the ground under a blanket of fallen leaves cemented by ice and frost. It emerges in the evening, during the late winter and early spring rains, when its fat stores have been reduced and it needs food.

Once awakened from their winter's slumber by the seasonal rains, spotted salamanders may travel in large numbers across the forest floor, seeking the same vernal pools where they were spawned and they themselves will reproduce. Many predators await the traveling salamanders, including mammals, such as raccoons and foxes, as well as other amphibians, such as bullfrogs and green frogs. I have also observed snapping turtles eating them in breeding pools.

It has been suggested that the spotted salamander may have noxious skin secretions, which may act to deter some predators; however, in almost 40 years of experience with this species, I have not personally seen evidence of this. Autonomy has also been suggested as an escape mechanism, but again I have never observed this, nor have I found specimens with detached or regenerated tails.

Despite its obscurity, the spotted salamander does have some dedicated fans and is a relatively easy animal to care for if a few basic husbandry rules are followed. The spotted salamander is not very demanding of space in nature, occupying an area of only about 600 or 700 feet and an actual home area of only about half a square foot. An adult pair or five to 10 juveniles may be maintained comfortably in a 10- to 20-gallon  glass terrarium, with minimal light requirements. This salamander is rarely, if ever, found in natural sunlight, thus eliminating the need for full-spectrum lights in captivity. I recommend normal fluorescent bulbs that emit no heat. The spotted salamander thrives in cooler temperatures and will be more active when temps are between 50 and 70 degrees Fahrenheit.

Keeping Ambystoma maculatum successfully will require dampness and a substrate in which the salamanders can burrow. I use ground pine bark mulch successfully with this species. It provides moisture retention along with acidity, which prohibits the growth of harmful bacteria and fungus. Other alternatives are sphagnum moss, ground peat moss or coconut mulch. I avoid substances that have a tendency to become moldy when kept at a higher humidity level, or those that dry out too quickly. I also avoid those substrates that have harmful odors or oils, such as cedar. Replace the substrate on a monthly basis.

Keep the substrate moist but not wet. Allow only the top of it to dry naturally. Spray the top of the substrate with fresh spring water to accommodate the salamanders' hydration needs. It is not necessary to use a water bowl, but it doesn't hurt. As long as the mulch is given a good soak with fresh spring water, the salamanders will perfuse what they need through their skin and vent. I have to emphasize spring water; do not subject the salamander's sensitive skin to the tap's hard, chlorinated water. In the event that tap water is necessary, dechlorinate it by letting it sit in an open container overnight. This will not, however, eliminate other impurities or harmful pathogens, such as heavy metals and dangerous bacteria.

In nature, Ambystoma maculatum has a varied diet, which includes, but is not limited to, earthworms, beetles, grubs, moths, other salamanders and most probably other small vertebrates, such as neonate rodents. In captivity, the spotted salamander will thrive on soft-bodied worms, crickets and the occasional pink mouse for adults. I have observed peculiar feeding strategies with this species that have, to the best of my knowledge, no prior documentation. Among my animals, I have observed juveniles that, when in the presence of live crickets, will raise a front limb one at a time and turn their wrists forward and backward continuously in a possible effort to attract wandering prey similar to digit tapping in Fowler's toads (Bufo fowleri). I've also seen tail luring among my salamanders that mimics what is seen in many snake species.

The spotted salamander is not, and may not ever have been, bred in captivity other than when utilizing natural outdoor conditions within its natural range. Successful captive breeding would entail enclosing an area of approximately 8 feet wide and 12 feet long with railroad timbers or concrete. Sink retaining walls around 8 to 10 inches below the surface. A relatively shallow pool of water approximately 4 feet in diameter should suffice for egg laying. Provide shade in at least two-thirds of the enclosure, if not all of it, and offer a thick layer of deciduous castings over loose soil or sand. This helps salamanders search for food and escape the heat of the day.

The spotted salamander is unaggressive, which is one of the many reasons it is an attractive captive for beginners. Just respect its soft, sensitive skin. Handle only when necessary, and make sure it is done with clean, wet hands, so you lower the risk of passing on harmful bacteria and possible skin damage by desiccation

Keep specimens outdoors year-round, and turn the soil late in the season to enable the salamanders to burrow below the frost layer in the winter. During late winter and early spring, spotted salamanders surface and search for a place to reproduce.

In nature, males typically arrive at the vernal pools first and deposit spermatophore along the bottom. These resemble small, white cones. Once females arrive a day or two later, males will nudge at them in a semi-nuptial dance, stimulating the females to pick up the sperm capsules with their swollen cloacal lips.

Fertilization occurs internally, and the female will release a small gelatinous paste, which will rapidly absorb water, anchoring the eggs to submerged branches. The clear, gelatinous mass typically contains 100 to 200 eggs. It will often develop a greenish algae, which helps the developing embryos by producing oxygen. In turn, the algae benefits by having a source of carbon dioxide and a place to live. Developing eggs will release larvae after 30 to 60 days, and larval development from there will depend on variables such as oxygen levels, temperature and evaporation rate of the natal pool.

Larvae feed on algae and small aquatic invertebrates, such as mosquito larvae and worms. In nature, most larvae metamorphose and leave the water in anywhere from 14 to 20 weeks, which means around August or September, and sometimes sooner. Larvae occasionally overwinter in water until the following spring. The new land-dwelling spotted salamanders are approximately 2 inches long. They will develop faint yellow spots within a week and will eat appropriate-sized invertebrates immediately. Do not house babies with adults, as they are at risk of being eaten. Juveniles can be cared for the same as adults.

A Genus With Range

Ambystoma is a large genus, consisting of 15 recognized species. The more popular in the reptile and amphibian hobby include the tiger salamander (A. tigrinum), marbled salamander (A. opacum) and blue-spotted salamander (A. laterale). All of the species have been dubbed mole salamanders because of their crepuscular habits and subterranean hides. The Ambystoma genus can be found across the United States and in parts of Canada, with the spotted salamander's range running from southeast portions of Canada south to Georgia and west to east Texas.

The spotted salamander can satisfy even the toughest of critics. Long-lived and easy to care for, this wonderful species is an excellent choice for everyone from the beginning hobbyist to the seasoned professional. Respect your laws and native populations, but give this gentle animal a chance if the opportunity presents itself.

Leo Spinner splits his time between Cape Cod in Massachusetts and southeast Pennsylvania. He has studied amphibians, reptiles and invertebrates for more than four decades, and he is the founder and owner of Skin & Scales, as well as the Spotted Turtle Institute of Herpetology.