We Are On Pace To Witness a Mass Frog Extinction
Australian Green Treefrog Run Over By Lawn Mower Survives, Is Flown 2 Hours for Treatment
New Leopard Frog Species Discovered In Virginia

Cane toads are known for eating most anything that can fit in their mouths, and a photograph shot by Peruvian park ranger Yufani Olaya shows one such individual trying to stuff a bat in its mouth. Olaya apparently saw the entire act play out while working at Peru's Cerros de Amotape national park. Olaya told the Rainforest Expeditions blog that the cane toad was sitting on the ground with its mouth agape when the bat flew near the toad's mouth. The toad then lunged and shut its jaws on the bat, succeeding to get most of the bat into its craw, with the exception of the bat's wings and tail. As the toad tried to adjust its grip, the bat became free as the toad spit the bat out. 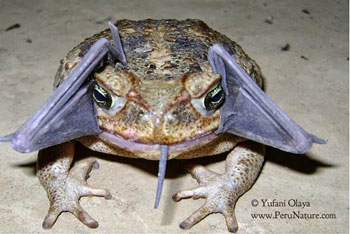 Charles Linkem, postdoctoral fellow at the University of Washington's biology department told NBCnews that it is possible that this population of cane toads may have developed a strategy of feeding on bats that fly low and that this may be common but just never previously observed. He said that cane toads will eat most anything that they can fit into their mouths. Or it could have been a fluke event that happened to be captured by a camera.

Cane toads are native to the southern United States and Central and South America but have been introduced to other areas of the world, including islands in the Pacific and Caribbean, and in Australia, where the 16th episode of season 6 of The Simpsons, "Bart versus Australia" prominently featured Bart releasing a bullfrog, which is a direct reference to the introduction of the cane toad in Australia to protect sugar cane from the cane beetle. The cane toad has since become a living ecological disaster in the land Down Under.