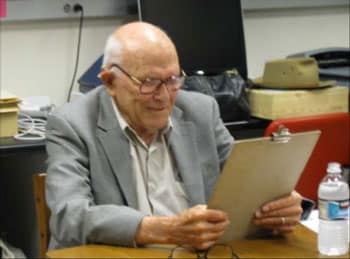 Stebbins authored the Field Guide to Western Reptiles and Amphibians and more than a dozen other books.

Dr. Robert Cyril Stebbins, author of the Peterson Field Guide Series’ "Field Guide to Western Reptiles and Amphibians" and more than a dozen other books, has died. He passed away Sept. 23 at the age of 98. Stebbins began his career as a naturalist and herpetologist with the University of California, Berkeley Museum of Vertebrate Zoology in 1945 and became curator of the museum in 1948.

Stebbins, Professor Emeritus of Zoology at UC Berkeley and a curator emeritus of the university’s Museum of Vertebrate Zoology, authored more than a dozen books during his career, and was recognized not only for his skill as a biologist, but also for his capability as a biological illustrator. His guides include highly detailed illustrations painted by Stebbins with water colors.

During his career Stebbins described four species or sub-species of herps, including the Jemez Mountain salamander (Plethodon neomexicanus), the Panamint alligator lizard (Elgaria panamintina), the yellow-eyed ensatina (Ensatina eschscholtzii xanthoptica), and the southern Torrent salamander (Rhyacotriton variegatus).  The Tehachapi slender salamander (Batrachoseps stebbinsi) and the Sonora tiger salamander (Ambystoma tigrinum stebbinsi) are named in his honor, and a third herp, the southern California legless lizard (Anniella stebbinsi) was named in his honor just a few days before he passed away.