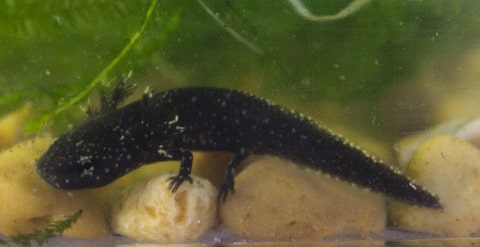 It is easy to sex adult Paramesotriton chinensis. When two animals are compared side by side, the tail of the female is noticeably longer than that of the male. In addition, during the breeding season, the tail of the male newt develops a bluish-white stripe that runs along the length, as well as a swollen cloaca.

To prepare for breeding, I stop feeding them for approximately two months during the winter. In addition, I open the window to the salamander room so the temperature drops approximately 10 degrees Fahrenheit from the usual mid-60 degrees. 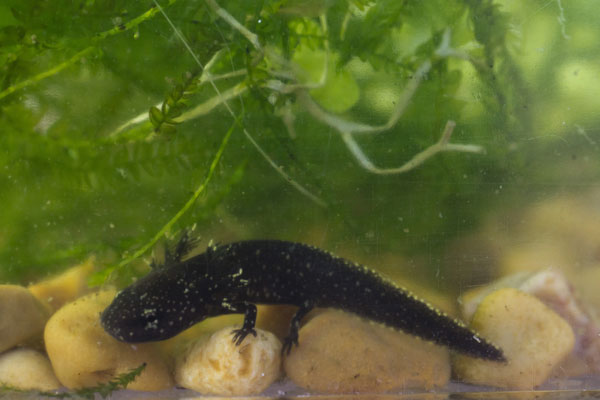 Larvae are approximately 1 centimeter in length after hatching and jet black in color.

My newts have bred in late spring and early summer. Tail-fanning by the male is observed during courtship. I have never observed the actual mating, but tail fanning lasts throughout the spring. The eggs are laid generally around the beginning of June.

Around 80 to 100 eggs are deposited individually throughout the aquarium, mostly on the Java moss, but also on the driftwood, as well. The larvae hatch out in approximately two weeks. Larvae are approximately 1 centimeter in length after hatching and jet black in color. Some spotting will develop in certain individuals in the larval stage. Warty newt larvae are best raised separately from the adults, either in a different aquarium or within a separated section of the adults’ aquarium if only a small number are being reared. I have found breeding traps designed for live-bearing fish to be particularly useful when separating larvae in the same aquarium as the adults.

Larvae should be fed daily on live foods, such as newly hatched brine shrimp, daphnia, white worms and black worms for older individuals. Larger individuals will also accept frozen bloodworms and other commercial foods. After approximately three months, the larvae will metamorphosize into land-dwelling juveniles. Juveniles will readily feed on an assortment of small prey items, such as isopods, fruit flies, pinhead crickets, black worms, small sections of cut earthworms, white worms and even thawed frozen bloodworms offered with forceps. Juveniles should initially be fed daily. Feeding can be reduced to three times a week as the young salamanders grow.

Juveniles are best housed in small plastic reptile cages, such as Kritter Keepers. Temperatures are the same as you keep adults (the mid-60 degrees Fahrenheit). The exact size is not too important as long as enough space is provided for all of the individuals to seek cover. Shelter is provided in the form of small cork bark sections, broken sections of small clay saucers, and small plastic saucers with a hole cut in one end. Substrate can consist of damp paper towels or a layer of moist forest soil. If paper towels are used, care must be taken to not let the towels dry out. In addition, paper towels should be changed weekly or sooner if heavily soiled. Given that salamanders absorb water through their skin and do not drink it directly, a water bowl is not provided. Young adults can be returned to the water and kept in the same manner as adults.