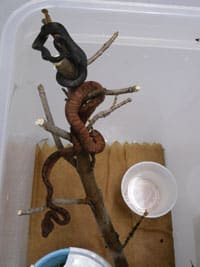 Annulated tree boas (Corallus annulatus) are considered to be slow to reach sexual maturity. It is not recommended to breed this species until about 5 years of age. These snakes are live-bearing animals and have a very long gestation period. It is not necessary to cycle animals that you are not planning to breed. Only snakes that are in excellent health and body condition should be bred, and in most instances it would be wise to allow a year off in between breeding cycles to allow the female to recover and to contribute to a long, healthy life for your adult annulated tree boa. 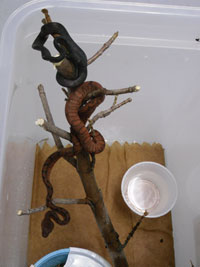 The process described here for breeding annulated tree boas has been successfully used at the Nashville Zoo for the past several years. Given that the gestation period is long, the breeding process takes time and a lot of patience

I begin preparing for the breeding cycle in mid to late October. I remove the substrate from the breeder snake enclosures and replace it with a more suitable mix. For reproductively active annulateds, I prefer to have a 2-inch layer of pea gravel on the bottom of the cage. Next I’ll add their normal substrate – a mixture of hardwood mulch, peat moss and coco peat– on top of this in a layer about 2 inches deep. This can be important during the breeding season allowing excess water to be siphoned out if needed. At this point, it is a good idea to assess the female’s enclosure to see that it is “baby proof.” Any possible escapes should be less than half a centimeter in diameter, or it is a risk that the neonates will disappear out of the enclosure.

The next step we take is to begin transitioning into a cooling and raining period. The animal’s normal temperatures should allow a gradient ranging from 78 to 85 degrees Fahrenheit, with a hotspot of 95 to100 degrees and the night time low (NTL) should not get below 75 degrees. In early November, I shift my snake enclosures to a spot where the temperatures are slightly lower during the evenings. I want the NTLs to be around 73 to 74 degrees at this point. Day temperatures should still be approximately the same. At the same time, I begin to mist the enclosures more frequently. Typically, I spray the annulateds every second or third day, but at this point during the cooling period, I start to spray daily. A short mist once in the morning should do the trick, enough to get the humidity very high as the day lamps heat the water. Good airflow is more important at this time to help prevent issues of fungus or mold.

During the breeding cycle, I have always continued to feed my annulated tree boas. Food is offered once every two to three weeks. As long as the temperatures are maintained within the described range, digestion will not be a problem.

After about two weeks (in late November or early December), I drop the temperature a little more and increase spraying to twice per day. The goal now is to get the NTL between 70 and 72 degrees. To avoid any possible complications or stress, I do not let my animals get below 69 degrees. During the reduced NTL temperatures, it is important to have your day time temperature gradient of 75 to 85 degrees and maintain the temperature at the basking spot at 95 to 100 degrees.

Maintain this routine for all breeder animals separately until January. At this point, I begin pairing the animals. I always introduce a male into a female’s enclosure. I leave the pair together for two or three nights at a time and then separate for two or three nights. Even if copulation is observed, I keep pairing them in this manner until the middle of March or if ovulation is apparent in the female. Ovulation is observable by a mid-body swelling in the female annulated.

By mid-March, or once ovulation has been observed, I reverse the cooling and misting cycle to return the animals to their normal temperatures and schedules. If ovulation was not observed, don’t worry. It can be easy to miss. You can keep pairing the animals occasionally during this time for good measure, but your annulated may be gravid anyway and should be treated as such until you are certain.

After successful copulation, it will be about 6 to 9 1/2 months until she gives birth (parturition), and this time could be shortened if the snakes are given access to nocturnal basking sites via infrared or ceramic heaters. She may bask during this time period, which does not happen often with annulated boas that are not gravid. You may also walk in to find her with her belly upside down under the heat occasionally, and this can be normal behavior at this time, as well. Many annulateds will go off food during gestation, but some will continue feeding throughout. Do not be surprised if your typically calm annulated boa is now all of a sudden aggressive. They can become a bit more defensive with a belly full of neonates.

On the day of parturition, red and black babies will be crawling all over the enclosure. It is always so exciting to see fresh little snakes moving through the enclosure with their mom. Annulated tree boas can have between six and 16 neonates. It is important to be prepared for this volume before the babies arrive.

Neonate care is very similar to the care of an adult animal. One difference is that the neonates should be kept in an environment with higher humidity than an adult snake. Neonates should be housed separately when possible, but they can be kept together if necessary. If they must be kept together, feed snakes separately. They can have a strong feeding response and may fight and even consume one another if left before prey has been consumed. I use a Large ShowOffs Storage Container, which is an opaque Sterilite file storage box, measuring 12 inches tall, 12 inches long and 8 inches wide, with holes drilled into the sides. I keep it at a consistent 82 to 86 degrees, both day and night. A damp paper towel substrate and sphagnum-moss-filled hide box is provided in this enclosure. The paper towel substrate will need to be replaced every time it is soiled, or at least once every five days to avoid molding. The sphagnum moss should be replaced about once per month or as otherwise needed. Perching should be provided at different angles as well as a horizontal perch. As discussed earlier, I have not had problems getting a snake to eat as long as food was offered at a warm to hot temperature. The temperature of the food item is especially important for neonates and juveniles. Most snakes start off feeding on whole or partial pinky mice. Feeding begins after the first shed cycle is complete. All neonates can be housed in this or a similar setup until a year of age when they can begin to be housed as the adult annulateds.

William Baugher has been a reptilekeeper with the Nashville Zoo for the past 4 years. Prior to his work at the zoo, he was a hobbyist for more than 15 years and performed salamander undergraduate research with Ambystoma barbouri in Tennessee with Belmont University. He has successfully bred annulated boas in two consecutive breeding seasons for the Nashville Zoo.