In the wild, alpine newts (Ichthyosaura alpestris) begin breeding at the end of winter or the beginning of summer depending on the region. These newts reach sexual maturity at 3 or 4 years old. Males are usually faster by six months to a year. Males return to water before females, and once they have come to the water, males’ appearance and crest change. Both males and females breed where they are born.

In habitats where food is scarce, reproduction can occur every other year. This is important for a newt breeder to keep in mind. Feed animals often and with consistency.

If you want to breed this species, I advise you to buy at least two pairs. Males can and should be housed together because this competition encourages breeding.

Gradually lower the temperature over several hours to 41 degrees Fahrenheit or a couple degrees lower. Humidity should be around 90 to 100 percent. Two to three months of these conditions are optimal to induce breeding. 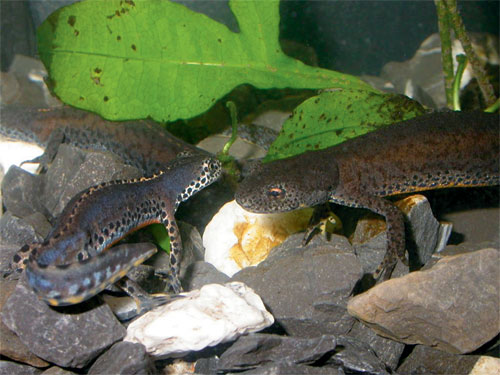 Alpine newt courting is very complex, and it has three phases. When a male has found a female, he follows her and positions himself in front of her. This first phase, called the “orientation display,” serves to help the amphibians decide whether they are a reproductive pair.

If the female stays still, the male begins to fan his tail, and he starts a “static display.” The male moves the fan of his tail to one side of his body, and the tip is addressed toward the female’s head. The male also performs a “lean-in,” stretching his hind legs and remaining suspended like that for a few minutes to an hour. Meanwhile he displays the “cat-buckle,” which serves to visually increase the height of his crest. In this position, he comes closer to the female by fanning his tail, and he touches her with his flank or tail. All of this movement serves to hypnotize the female. Then from his cloaca the male releases pheromones that induce the female to breed.

The third and last phase of alpine newt courting is the “spermatophore-transfer display.” The male moves away from the female, and she follows him. He moves slowly, so she normally gets to touch his tail. After this, the male releases one to five spermatophores, gelatinous masses with a sperm tip, and they are left on the ground. Leading the female onto the spermatophore, the male stops the female by standing perpendicular to her, so the two form a T shape. In this “brake” position, the female’s cloacal lips finally collect the spermatophore’s white tip of sperm.

Three to 10 days after mating, the female starts laying her eggs. It generally happens at night and lasts one to three months.

Eggs initially measure about one-tenth of an inch long, but they can reach nearly one-fourth of an inch before hatching. Females lay eggs one by one, but sometimes two or three are laid consecutively.

Their favorite egg-laying spots are the tender leaves of aquatic plants. Leaves fold around the egg and hide it, so other newts and predators cannot find and eat them as easily. Good plants to use in captivity are Apium species, Bacopa caroliniana, Ceratophyllum demersum, Myriophyllum aquaticum and similar plants. Some keepers have also used plastic-bag strips with success. As for plastic plants, I have observed that newts prefer live ones if they can choose. Alpine newt females without leaves for egg laying simply lay their eggs in groups on the substrate.

Females lay 30 to 500 eggs, and they tend to lay them on the upper levels of plants because this is where oxygen dissolves into the water at the highest levels. Lower leaves have less oxygen available for the eggs. Females also tend to use the more external leaves because they are easier to fold around the eggs. Check plants during days that follow mating, cut leaves with eggs, and remove them to a separate tank. The size of the tank can vary, so be mindful of how many larvae — and ultimately young newts — you will eventually have in that tank once the eggs hatch, which happens after 10 to 30 days. 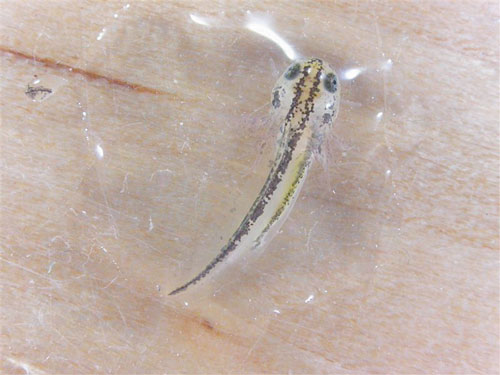 At birth, the nearly half-inch-long larvae have tiny gills, but they lack legs. They cling to submersed objects with two little fleshy strips situated beside the head and oriented downwards. These strips disappear when the anterior legs appear. Alpine newt larvae have a pale yellowish-brown skin on which there are many little dark spots. The ventral side is white. Larvae also have a dorsal-caudal crest, and a small crest is present on the ventral part of the tail.

Never keep more than six alpine newt larvae per gallon. Water must not be deeper than 4 inches, and it has to be void of metals and pesticides. Tap water can be used if you first let it sit in an open container for 12 to 24 hours, so these unwanted elements evaporate. I err on the side of caution and let water sit for a day or more because larvae are delicate. You can also use a water dechlorinator. Remember to partially change the water every day, and completely change it with treated water every other day.

Alpine newt larvae do not eat the first two to three days after hatching. Later, they can be fed newly born nauplii, such as Artemia salina. When feeding them this brine shrimp species, try not to introduce full or empty eggs into the larvae’s containers because they could cause an intestinal block. Avoid this issue by aspirating the eggs with a small lab pipette, and then use a finely meshed net to catch the nauplii. As the newt larvae grow, you can feed them bigger nauplii, or you can feed them worms (Enchytraeus spp., Tubifex spp. and pieces of Chironomus spp.) and other bugs.

The duration of the larval stage, which can last two to almost four months, depends on food availability and temperature. Temperatures under 59 degrees can slow development. Maintain temperatures between 64 to 72 degrees, and offer the larvae food twice a day. Give them as much as they will eat in a sitting.

Alpine newt larvae change when they’re larval stage is ending. When you notice metamorphosing larvae, it is time to transfer those larvae into secure, well-aerated containers holding water nearly a half-inch deep. A small rock or other surface must be present to break the water. Metamorphosis takes place in a couple of days, and young alpine newts measure up to nearly 2 inches long, rarely more.

Young alpine newt juveniles are more difficult to keep than larvae. Very small, they can eat only tiny, slow-moving insects, such as neonate mealworms and crickets, Enchytraeus species, aphids, Collembola species, and similar insects. Feed juveniles once a day with as many mealworm or springtail neonates the newt will eat in a sitting.

Groups of four or five juveniles can be kept together in plastic tanks measuring 8 inches long, 6 inches wide and 6 inches tall. Furniture must be minimal. Absorbent paper towels work as a substrate, and half of a plastic glass works as a hide, which they all share. A water bowl is not required, but adding a shallow bowl — one that permits a newt to keep its head above water — is OK. Lightly sprinkle the enclosure with water every day, and change the substrate every other day.

Speybroeck, J. (ed.) 2004. Personal Notes on the Herpetofauna of Europe.