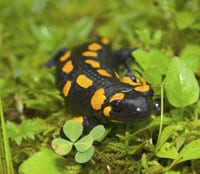 Fire salamanders are possibly the easiest of all salamanders to breed in captivity. If a mature male and a mature female are kept together throughout the year and allowed to experience some seasonal changes, the female will naturally produce young in the spring. Mating takes place in the fall. These salamanders do not require the same exacting conditioning and stimuli to breed as their mole salamander cousins (of the Ambystomatidae family). However, to ensure successful breeding, a cool fall and winter period, together with some exposure to seasonal light changes, are recommended. Ideally, their terrarium temperature should drop to the mid- to late-40s (Fahrenheit) for a period of at least a month in the winter, with a one- to two-week cool down before and warm up after. 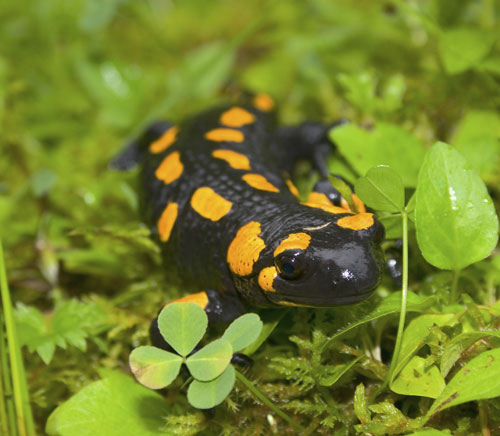 Unlike many of the lunged salamanders, Salamandra species mate on land. Males produce a cone of jelly tipped by a packet of sperm. This is called a spermatophore. The male leads the female over the spermatophore, and she stands over it and takes it up into her cloaca. This is repeated several times, but frequently a spermatophore or two are left behind. This can be very helpful to the keeper because when you spot a spermatophore, it usually means a mating has taken place. It's not a bad idea to leave the female and male together for about a month after you first see a spermatophore, and then remove the male until the female has given birth in the spring.

Gestation period varies depending on species and subspecies. While most Salamandra salamandra subspecies produce young in the spring following a fall mating, some forms, such as S. s. bernardezi and S. atra, could take significantly longer. These forms can take months or even a year to produce young because their offspring are born as fully formed salamanders, while the larvae of most other fire salamanders are born as well-developed larvae (tadpoles).

Fire salamanders are ovoviviparous. This means that the young develop inside their egg membranes inside the mother, and actually leave the egg at the moment of birth. Most other salamanders, including the newts, lay eggs shortly after mating, and these eggs take several weeks to develop into tiny legless larvae that must spend many months developing.

In late winter, the mother should be provided with a shallow water dish containing about an inch of water that is about as wide as the salamander is long. Fire salamanders are terrible swimmers, and the mother will die if she cannot exit the water. When she is ready to give birth, she will back into the water dish and the larvae will be released, one by one, over the course of a few hours. She may take a break and return at another time to continue. This can mean a steady production of larvae over a period of several days or in bouts over several weeks.

Fire salamander larvae get a significant head start, often born at more than an inch in length and with all four legs fully developed. Their large size makes for easy feeding, because large salamander larvae with legs do not require live food, unlike the small legless larvae of other salamanders. The large size also means that the larvae reach metamorphosis in a shorter period of time, at about 2 inches in length. Rate of growth depends on temperature and frequency of feeding but the larval period can last as little as 4 weeks.

The larvae should be removed to a rearing aquarium after birth, where they can be raised communally, to a max of 10 larvae per 10-gallon aquarium. The aquarium should contain aged tap water or tap water treated with a dechlorinator. The aquarium need not be elaborate, and the water should be kept between 60 and 70 degrees Fahrenheit. Although fire salamander larvae tolerate flowing water more than most of their relatives, limit filtration to a gentle sponge filter powered by an air pump. Perform partial water changes every week, or sooner if the water begins to foul.

The larvae are ready to feed shortly after birth. Suitable foods include live blackworms, live daphnia, newt and salamander bites, and pieces of earthworm. I find the frozen bloodworm cubes sold for fish to be particularly useful for feeding large salamander larvae like these. When the larvae near metamorphosis, they start to develop angular features, slightly reduced gills and raised eyes. In the colorful species and subspecies, the larvae will show the beginning of adult coloration at least a week before metamorphosis. When you see these signs, remove the larva in question to a small metamorphosis tank. I like to use a 5-gallon aquarium with aquarium gravel that gently slopes up out of 1 1/2 to 2 inches of water. Just like their mother, the larvae are prone to drowning as they lose their gills. When the young salamanders leave the water, move them to a replica of their parents' terrarium and feed them the same foods, albeit in a suitably smaller form (e.g. earthworms cut into smaller sections).