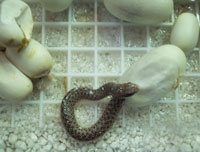 Supplement to the December 2008 REPTILES magazine article "Personality Plus."

In the fall of 1996, I introduced one of my male rufous-beaked snakes (Rhamphiophis rostratus) to my first female. By then she had grown to an impressive 4 feet in length. The male was roughly 3 feet in length. First I placed the female in a breeding enclosure and gave her a few days to settle in before I introduced the male. Sometimes using extra males increases the chances of copulation. 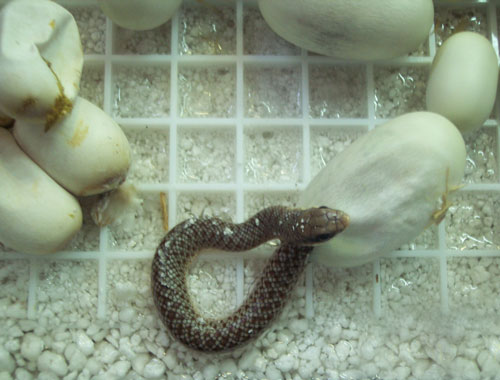 The author incubated his rufous-beaked snake eggs at 82 degrees Fahrenheit, and they hatched after 58 days.

Measuring 4 feet long by 2 feet wide by 2 feet tall, this breeding enclosure is a melamine cage with a glass front. The glass allows me to observe the snakes and make sure problems such as cannibalism don’t happen.

I didn’t cool them down before introducing them because these rufous-beaked snakes originated from Tanzania. There the climate ranges between 68 and 80 degrees Fahrenheit during the cooler months of June through August and can reach 86 degrees and higher between the months of December through March.

Within a few hours of introducing the male to the female, the male began courting her with rapid head motions, jerking his head from side to side. Although, the species normally displays this type of behavior, these particular motions were more pronounced and continuous after the introduction. That evening I witnessed the first copulation. The following day I witnessed copulation twice more before I removed the male.

I returned the female to her regular bin and placed an egg box measuring 12 inches long by 10 inches wide by 3 inches tall with damp sphagnum moss in her enclosure. Within the first month after copulation I noticed the female went into her pre-laying shed. Thirty-nine days after copulation the female laid eight eggs. They were about the same size as snake eggs from the genus Pituophis.

I incubated the eggs at 82 degrees in a small plastic bin. This incubating bin can be any size as long as it’s at least 5 inches tall with a cover and it’s adjusted to fit a varying number of eggs.

I prefer to double the layer of plastic crate, so in the end the eggs sat just above about 2 inches of the perlite and water mix. The goal was to lift the eggs high enough so they did not come into contact with the moist perlite, basically suspending them in an atmosphere of 100 percent humidity. This humidity automatically saturates the air inside the bin if it is sealed properly. I always poke a few tiny holes on two opposing sides of the bin to allow some circulation of air, so the eggs can breathe.

After 58 days of incubation the eggs began to hatch, and within 24 hours all eight eggs hatched. Each hatchling measured about 14 inches long.

After the snakes’ first shed, I tried some freshly thawed pinky mice, but they refused them. I tried live pinkies, and again they refused. I started to worry.

Then, by chance, I happened to thaw some pinkies but left them out for a few hours due to an unexpected emergency. They sat at room temperature, and by the time I returned home, the pinkies had a slight smell. Rather than waste them, I tried them with the hatchlings. They immediately gobbled them up. So I concluded that when you feed your baby rufous-beaked snakes it is best to thaw out the pinky mouse in the morning, allow it to sit for the day until it has a slight smell, and then feed it to the snakes. This procedure only needed to be done for the first few feedings. After that they readily accepted freshly thawed pinkies.

Want to read the full story? Pick up the December 2008 issue of REPTILES, or subscribe to get 12 months of articles just like this.