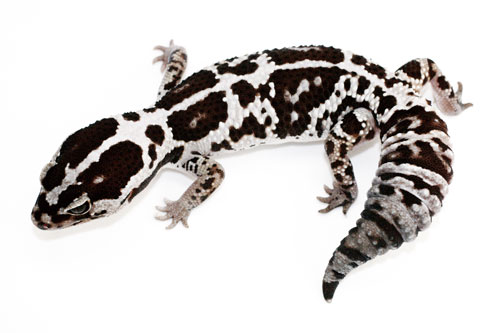 Captive breeding has helped to advance fat-tailed geckos, such as this white-out adult, in the pet trade.

Fat-tailed geckos are seasonal breeders. Captives tend to cycle around the same time as wild geckos do: from November to March. Most of our fat-tails breed from October to May, and most groups start to breed in December and January. We try to follow the natural breeding season as close as possible, but straying from it is not a problem. Breeding the geckos in late fall, winter and spring has yielded the best success.

A short cooling period helps to stimulate breeding in both males and females, but it is not necessary. The ambient temperature change of about 5 degrees in our facility during the Ohio fall and winter is enough to trigger all of our fat-tails to breed without additional temperature changes.

If you are going to cool your fat-tails, we suggest starting midway through fall. Normal temperatures are a hotspot of 88 to 92 degrees Fahrenheit and a cool side of 75 to 80 degrees. To begin cooling, reduce cage temperatures by a couple of degrees every day until geckos have a hotspot around 82 degrees, and the cool side of the enclosure is in the low to middle 70s. At night you can turn off their heat so the ambient cage temperature decreases to the low to middle 70s. 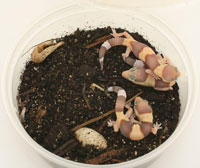 Make sure to keep fat-tails on a dry substrate, such as newspaper or paper towels, throughout the cooling period, and keep fresh water available at all times.

Once you start to cool down your breeders, discontinue feeding them. The lower temperatures slow their metabolism, and they don’t burn much weight. Our average cool-down period is four to six weeks.

After this cooling period, you can start to warm up the fat-tails a few degrees every day until enclosure temperatures are back to normal. Resume feedings during the warm-up period, but reduce quantities to two or three crickets for the first few feedings. You can also switch back to a moist substrate during this time to help bring the humidity back in line.

Once the geckos are back to normal temperatures and full feedings, you can begin introducing males to females. We breed our fat-tails in groups ranging from one male with two females to one male with eight females. We leave males in with the females for the remainder of the breeding season. Breeding occurs shortly after introducing the males, and soon females ovulate, and eggs begin to develop.

At this time you can place an egg box in the enclosure, but do not place it near the hotspot because it will dry out. We use plastic containers measuring 14 inches long, about 7 inches wide and 4 inches tall as egg boxes, and we drill a 1.5-inch hole in the top, so the female can access the egg box. We fill the container halfway with the same peat-moss-and-vermiculite substrate mix we use in the enclosures. Make sure the egg box soil is evenly moist. If you can pick some up with your fingers and squeeze it, and it clumps together but no water drips out, the soil is appropriately damp.

Check females often when they get close to laying because they sometimes lay their eggs outside the egg box. They usually lay two eggs at a time. Some small females lay only one egg, but this is uncommon. Average fat-tail eggs measure between 1 and 1.5 inches long. Females typically lay three to five clutches a year.

Feeding females heavily during the breeding season is very important. Offer them as much food as they will take, and be sure to supplement prey items with vitamins and calcium every time you feed these fat-tails.

Remove eggs from the egg-laying box soon after a female lays them, and place them in an egg incubation cup. We use 8-ounce deli cups with two small holes near the top of the container for air circulation. We fill the egg cup three-fourths of the way with the same mix of peat moss and vermiculite used in the enclosures. Keep the soil moist, but be careful because fat-tail eggs are sensitive to excess water. If you squeeze wet soil until it no longer drips, it should be perfect for incubating eggs.

Average fat-tail hatchlings measure 2.5 to 3 inches long and weigh about 4 grams. After babies hatch, we house them in groups of two to four in either Vision hatchling rack systems or shoebox-sized plastic containers. We use paper towels as the substrate. Temperature and humidity requirements are the same as adults.

We begin offering babies food a couple days after hatching. When they weigh 15 grams, they graduate to subadult and adult housing.

Want to read the full story? Pick up the December 2009 issue of REPTILES, or subscribe to get 12 months of articles just like this.