In 1849, portions of a giant fossil turtle bone that found its way into museum archives was documented by 19th-century naturalist Louis Agassiz. It sat for more than 100 years, until 2012, when amateur fossil hunter Gregory Harpel happened upon a rock-like object in Monmouth County, New Jersey creek bed when searching for shark teeth. Harpel took his find to the New Jersey State Museum for further examination, where assistant curator Jason Schein and co-workers recognized the object as a fossil of a sea turtle's humerus, or upper arm bone. The fossil bone was broken though, missing the end that would have been nearest to the shoulder.

Intrigued by the find, Schein and his colleagues joked that the other half of the fossil bone may be hidden away in a museum somewhere. They attempted to describe the fossil based on what they had but needed the expertise of others in the field, so they brought Harpel's fossil to Drexel University's Academy of Natural Sciences in Philadelphia, Pa. for further help in attempting to identify the species. What they didn't know at the time was the academy of natural sciences had a sea turtle humerus fragment that was broken at the end nearest what would have been the animal's shoulder area. And it was an exact fit to Harpel's bone. 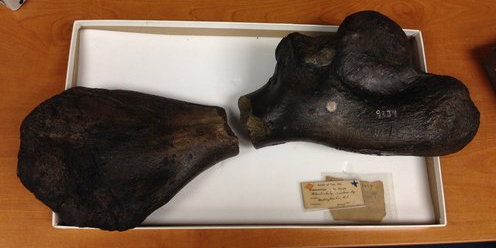 The fossil pieces collected more than 160 years apart are from the same sea turtle, Atlantochelys mortoni.

"The guys from the New Jersey State Museum came over with their half of the bone and thought, "let's compare it and see what happens," and sure enough, we have two halves of the same bone," Ted Daeschler, associate curator of vertebrate zoology at Drexel's Academy of Natural Sciences said in a video from the university posted on YouTube. "The same individual of this giant sea turtle, one half that was collected at least 162 years before the other half."

The fossil discovered in 1849 became the holotype for the species, Atlantochelys mortoni.  From the complete bone, the paleontologists calculated that the giant sea turtle was about 10 feet from the tip of its beak to its tail. It lived about 70 to 75 million years ago during the Cretaceous Period.