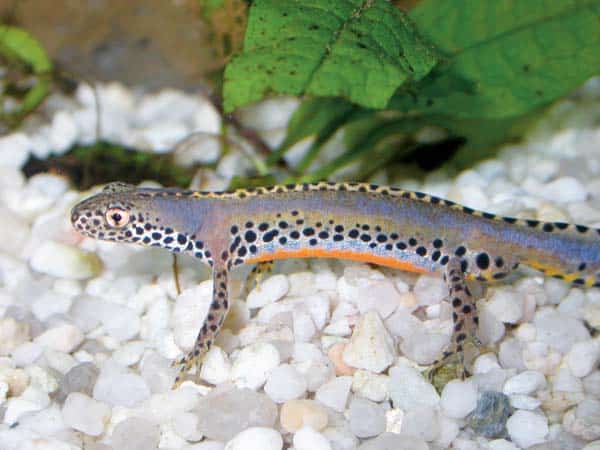 Colorful and elegant, the alpine newt (Ichthyosaura [Mesotriton] alpestris) is one of the most fascinating species among European newts.

Colorful and elegant, the alpine newt (Ichthyosaura [Mesotriton] alpestris) is one of the most fascinating species among European newts. This newt has a slender body and a rounded head, and its laterally compressed tail is slightly shorter than the rest of the body and ends in a sharp tip. Its skin is very smooth, especially during the aquatic stage, and it possesses four fingers and five toes. With gold irises and black pupils, it makes a striking captive.

Females possess a round trunk and grow a little more than 41⁄2 inches long. Males have a squarer trunk and measure up to 41⁄3 inches long. In the spring, sexual dimorphism is evident. Males possess a low, smooth crest along their vertebrae. Yellowish with black blotches, this crest measures one-tenth of an inch tall or less. Males also have a swollen and rounded cloaca. Females have a slight yellow-orange strip running along the dorsum. 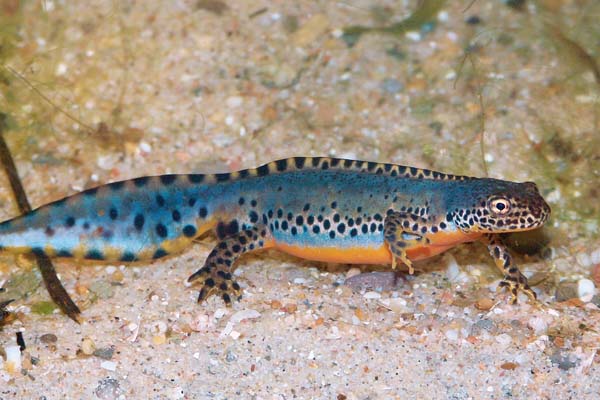 Alpine newts are widespread over much of Europe.

The belly is usually orange in both sexes, but it can be yellow or red. Belly spots are usually rare. Depending on the subspecies, but also partly on the individual, the throat can be plain or spotted, or it could have what appears to be a spotted collar.

Albinos also exist, but these newts with red pupils and black irises are rare    and delicate.

In spite of the preciousness of this species, it does not follow the common belief that beautiful means the animal is impossible to keep in captivity. The alpine newt is quite simple to keep and even simpler to breed with success.

Alpine newts are widespread over much of Europe. In Italy they live in the extreme north and the extreme south. They have isolated mountain populations in north and central Spain, and they’re found in Hungary, north Germany and Great Britain. From northern and eastern France up to western Ukraine and central Greece, the range is quite uniform. Germany, the Netherlands, Belgium, Denmark, the Balkans and Romania are also part of this newt’s range, but the amphibian is absent from islands and from parts of Slovenia and Austria. In the United Kingdom they have been introduced by man. 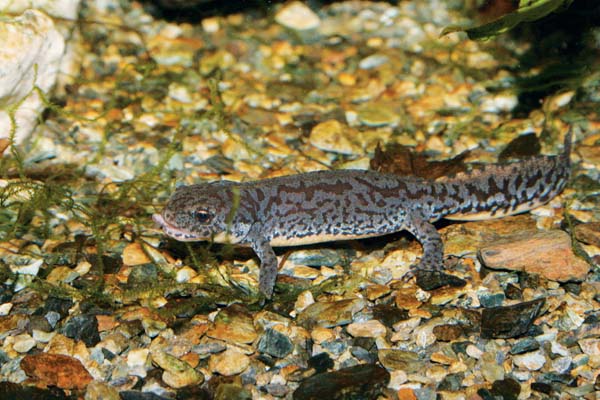 Alpine newts normally live in still or slow-moving water that is clear and full of vegetation. Apt water bodies include lakes, ponds, swamps, irrigation canals, drinking troughs, fountains and reservoirs. These habitats are normally immersed in woods. In northern Europe, I. alpestris is present mainly in the lowlands. The newts are more terrestrial in the north. In the southern parts of its range, the species often lives in mountains and hills, and it is aquatic throughout most of the year. The newts can live up to 8,800 feet in some regions of Italy and Albania.

Alpine newts can tolerate temperatures up to 84 degrees Fahrenheit, but this does not mean they can constantly live in those conditions. They like much colder temperatures. They have been found slightly active in winter under the frozen surface of lakes.

In the winter months alpine newts are less colorful, and they have thicker velvety skin. They become terrestrial, but they don’t get too far from their aquatic habitats. They shelter under cairns, piles of branches, fallen trunks, moss, mammal burrows, crevices, basements and other artificial constructions.

The diet of this amphibian consists almost exclusively of invertebrates. Wild alpine newts eat mainly crustaceans, gastropods and springtails. Occasionally they eat terrestrial invertebrates that fall into the water.

These predominantly nocturnal predators catch prey by using sight and smell. Olfactory abilities are especially important when seeking out slow-moving prey, such as crustaceans, and still prey, such as amphibian eggs or carrion. However, if alpine newts are hungry, they are more attracted to moving prey.

Alpine newts seasonally switch from an aquatic habitat to a terrestrial one, and astute keepers will provide both. Although these newts are quite simple to keep in captivity, European newts in general are not advisable for beginners. If kept properly, they breed successfully and can live up to 20 years in captivity. 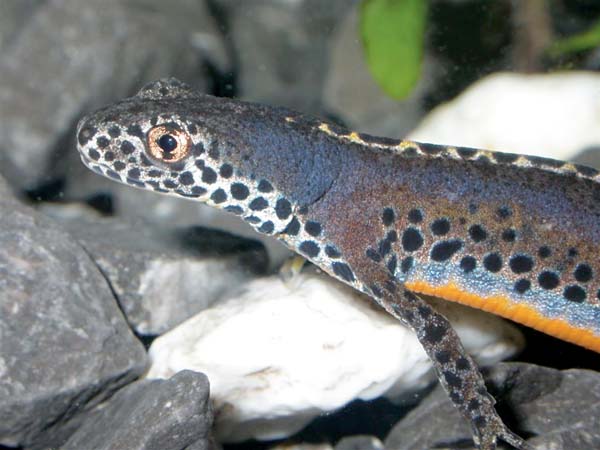 Keeping alpine newts in water year round is possible, but make sure to lower the water level during the summer, and maintain the water temperature at 41 degrees during the winter..

A 20-gallon aquarium can house newts during the spring and summer, the seasons of a newt’s aquatic stage. It should measure 28 inches long, 14 inches wide and 12 inches tall.

Include gravel on the bottom, some rocks and many plants, such as Cabomba caroliniana, Ceratophyllum demersum, Egeria densa and Myriophyllum aquaticum. A piece of floating cork or a rock breaking the water surface should be present because animals may want to haul onto land. These are also useful when newts pass between their aquatic and terrestrial phases.

Water should have a neutral pH. Use a dechlorinator to achieve this, or you can let water sit out for a day in an open container. The chlorine evaporates naturally with the second option. Keep water depth between 8 and 10 inches, and perform partial water changes monthly. Provide a water filter fixed on the slowest flux, and change or wash the fiberglass once a month.

These amphibians don’t foul their enclosures too much, but cleaning is required. Frequency depends on how many individuals are present, how big the tank is, and whether a filter is used. Bigger tanks and/or fewer animals mean you can clean less often. If you use a filter and add a cleanup crew of small crustaceans, you also don’t have to clean the tank as often.

Temperatures in both the water and the land area must never surpass 84 degrees, and the best range is between 57 and 71 degrees. If maintaining these temperatures during summer is a problem, move newt tanks into a cold basement and/or use a water cooler. Some newt breeders invert their animals’ seasons to combat this concern. They keep newts outside during autumn and winter, and hibernate them in appropriate refrigerators with temperatures of 37 to 44 degrees during the summer. A thermostat can be dangerous as too high of a temperature will kill the newts.

Artificial lighting is not required if ambient light comes in from a nearby window, but this light should not directly fall on the tank. A single fluorescent tube emitting 2 percent of phytostimulant light can be used to keep plants healthy and to maintain the newts’ biological clock. This light can be purchased at a pet store or online.

During autumn and winter, alpine newts become terrestrial to hibernate. Three to five individuals can be moved into a small plastic tank measuring 14 inches long, 8 inches wide and 6 inches tall. Earth, dead leaves, a piece of cork and a little water container create the optimal conditions to hibernate these newts. 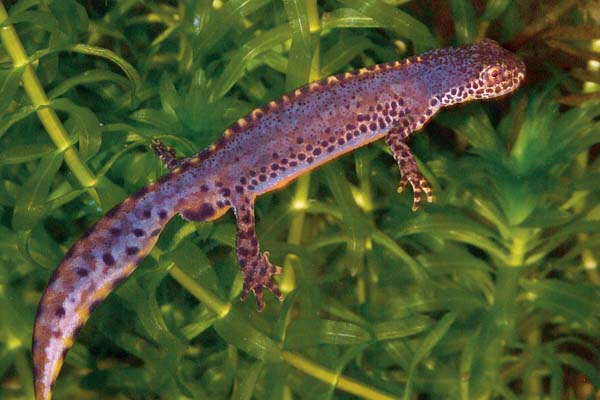 Males have a squarer trunk and measure a little more than 4 inches long.

Gradually lower the temperature over several hours to 41 degrees or a couple degrees lower. Humidity should be around 90 to 100 percent. After two or three months under these conditions, newts will be ready to breed.

Alpine newts can also be kept aquatic throughout the year, but remember to lower the water level in summer. Maintain the water temperature at 41 degrees during the winter.

Alpine newts are voracious eaters. Feed those in an aquarium every other day with snails (after you have broken their shells), slugs, earthworms, crickets, mealworms, waxworms (only on occasion), Chironomus species, Daphnia species, Tubifex species, beef, chicken, and well-washed raw fish.

During the terrestrial period, don’t feed hibernating animals. If you don’t intend to hibernate terrestrial newts, then you can offer them mealworms, crickets, slugs, spiders and diced earthworms. If the diet is varied enough, vitamin supplements are not needed.

Ichthyosaura alpestris is one of the most fascinating species of European newts. The alpine newt’s orange belly and gold irises make for a colorful captive amphibian, and it’s quite easy to keep and breed.

Alpine newts have undergone taxonomic unrest in recent years. Since 2000, the species has shifted from the Triturus genus to the Mesotriton genus to its current taxonomic genus, Ichthyosaura. Subspecies of I. alpestris also have been recognized, but the validity of some continue to spur scientific debate and study.

According to caudata.org, an online community of amphibian enthusiasts, the following three alpine newt subspecies are the most commonly kept and bred in captivity.

Other alpine newt subspecies have been recognized, but herpkeepers are less likely to find them in the pet trade. They include the following subspecies.

Fabrizio li Vigni lives in Palermo, Italy, where he is studying philosophy at the University of Palermo. He has published a variety of articles about amphibians and reptiles in captivity. He seeks to become a scientific reporter and a documentarist some day.