Clawed frogs in the Silurana genus are smaller alternatives to the much larger African clawed frog.

Silurana species are unique clawed frogs. Unlike the African clawed frog, this genus is made up of tropical species found in the lowland rain forest regions of western Africa. They are often found among other clawed frog species native to the Congo Basin, such as Xenopus andrei, X. boumbaensis, X. fraseri and X. pygmaeus.

The Silurana genus currently includes three identified species: Silurana tropicalis, S. epitropicalis and the newly described S. paratropicalis. The Latin prefixes “epi” and “para” are used to describe the geographical species based on their relation to S. tropicalis.

All species within Silurana share common morphological characteristics such as short, rounded snouts; small eyes; a subocular tentacle located under each eye; and a fourth, black, keratinous claw on the prehallux of each foot. It is likely that this genus may contain other members that have not yet been distinguished.

In the wild Silurana species commonly inhabit shallow pools and flooded lowland rain forest regions. During the dry season they migrate to more permanent water sources when they’re available, or they aestivate in the mud until it rains. Habitat tends to vary depending on species, distribution and locality. 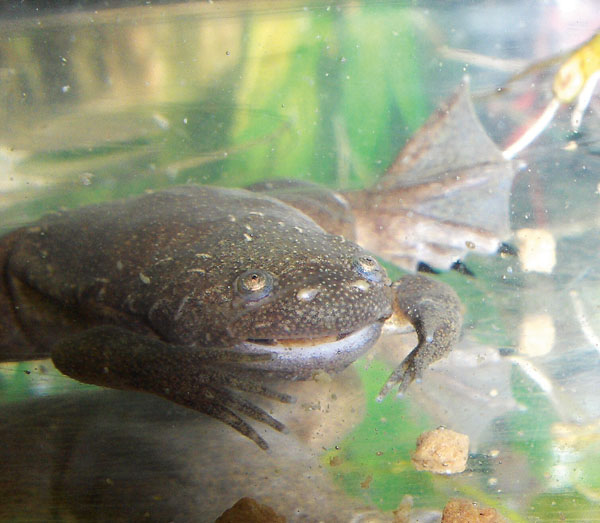 Commonly known as the tropical or Nigerian clawed frog, S. tropicalis is perhaps the most commercially available member of the Silurana genus. Females average about 2 inches in snout-to-vent length, and males are typically 15 percent smaller. Color varies from a solid dull-olive to a darker brown, and the belly is whitish or gray and often mottled with tiny spots. This species ranges from Senegal to western Cameroon north and west of the Sanaga River.

In captivity these frogs are fully aquatic. They require water temperatures between 72 and 80 degrees Fahrenheit with pH levels between 7.0 and 7.8. Using water directly from the tap is safe only after it is treated to remove chlorine and detoxify heavy metals. I use the dechlorinator Stress Coat, which also contains aloe to aid in healing and to prevent disease by replacing the frog’s colloidal coating. To reduce stress and the chances of shock, make sure the water temperature is at least 68 degrees before adding the frogs.

Aquarium size varies depending upon species and number of clawed frogs. Typically, the minimum size for any Xenopus or Silurana species is a 20-gallon long tank or an equivalent measuring 2 feet long by 1 foot wide by 1 foot tall. Long tanks provide a greater surface area for the frogs and house them more comfortably than a tall tank. Four to six tropical frogs can be housed in a 20-gallon long tank. Always provide a secure lid for the enclosure. These frogs are experts at propelling out of the water and escaping their cages.

When using a substrate, most frogkeepers consider either gravel or sand. However, some prefer no substrate at all for easier maintenance. As long as the frogs have bog wood to hide under, they seem comfortable without gravel. Gravel can also cause blockages should the frog swallow any.

Silurana species, like all clawed frogs, are sometimes shy and like to hide. Provide them with live plants such as the resilient Anubias barteri barteri, African bog wood and artificial water lettuce, which allows them to come out of the water and bask within the leaves.

These frogs require a balanced, high-protein diet. I use a specially formulated frog food from Xenopus Express for my frogs, but other companies have diets, as well. Most are composed of freeze-dried krill or gammarus (river shrimp). Occasionally I supplement their diet with live black worms or ghost shrimp. Ghost shrimp are also useful in cleaning up uneaten food and debris in the tank. 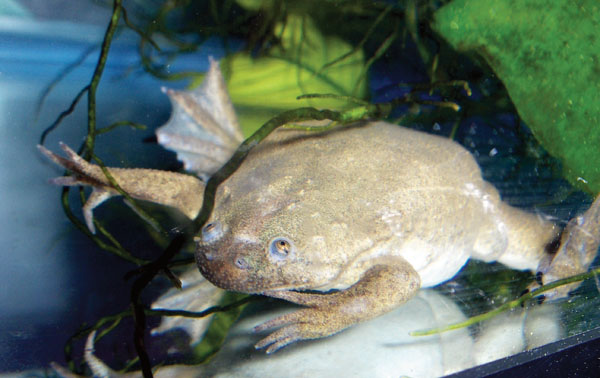 This female Silurana epitropicalis is from Kinshasa in the Democratic Republic of Congo. These frogs require hiding spots to remain comfortable.

Avoid live feeder goldfish and bloodworms (mosquito larvae) because they have been known to cause potential health problems. In general, overfeeding is more of a problem than underfeeding. Feed adults three or four times a week, and remove any uneaten food after 20 to 30 minutes.

Filtering your water and performing weekly maintenance can prevent some common health problems seen in clawed frogs. Recommended filters include power filters and biological sponge filters. Although there is much controversy regarding whether filters have ill effects on the frogs’ sensitive lateral-line system, many seem to believe that they do not. Keepers have seen frogs swimming directly through the currents produced by filters and even sitting on air-stone bubbles seemingly unaffected. A frogkeeper’s personal preference on this matter is suggested.

Weekly cleaning and maintenance can be achieved with a gravel vacuum to remove leftover food and waste debris from the bottom of the tank. You should also perform partial water changes once every two to four weeks for optimal water quality.

Given a proper diet and optimal water quality, Silurana species are normally quite resilient and long-lived. The best prevention for common health problems is to know your frogs’ normal behaviors. Inspect them daily, and look for any abnormalities, such as cloudy eyes, cottony tufts of fungus, excessive shedding or sloughing of the skin, abnormal abdomen or leg swelling, cuts or abrasions, abnormal swimming or buoyancy, and changes in feeding habits. Any of these signs might be an indication that your frog is not feeling well. Early detection of any disease increases the chances of successful treatment. 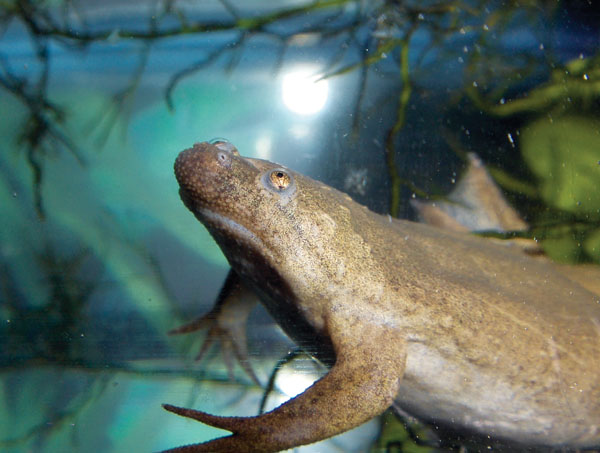 The Cameroon clawed frog (S. epitropicalis) averages about 2.5 inches in snout-to-vent length. Males average 20 percent smaller. Grayish-brown is common to karyotyped specimens originally collected from Kinshasa in the Democratic Republic of Congo. This color morph has also recently been collected from the Likouala region of the Republic of the Congo. This species is currently found in Cameroon, Gabon, and the Congo.

Because these frogs come from tropical rain forest habitats, it is important to keep their water temperature above 72 degrees. A frog’s immune system can become suppressed if it’s kept at lower temperatures for an extended period of time, and it becomes more susceptible to infections.

One such infection is chytridiomycosis. Chytrid fungus (Batrachochytrium dendrobatidis) is not only highly contagious, but it is also fatal in most cases. Infected frogs have been successfully treated with a solution of formalin and malachite green.

Another common infection comes from the anaerobic bacterium Aeromonas hydrophila, which results in “red-leg.” This bacterial infection affects frogs with poor immune function due to stress, and it is also often fatal. A weekly regimen of Koizyme can be added to the tank to help prevent many bacterial infections common to clawed frogs. Although Baytril has been known to treat red-leg, it is recommended to consult a veterinarian first for proper diagnosis and treatment.

Like with any animal, all new arrivals should be housed separately from your collection for at least seven days. Quarantining new frogs gives you the chance to notice any potential problems and to take note of a frog’s behavior. Feed and clean your established animals first, then take care of your new frogs. This practice could prevent cross contamination of disease or loss of animals.

All in all, frogs of the Silurana genus are interesting, enjoyable and relatively easy to keep if their requirements are met. With the right setup and care they can be hardy and long-lived in captivity, and they make a great alternative to their larger cousin, the African clawed frog.