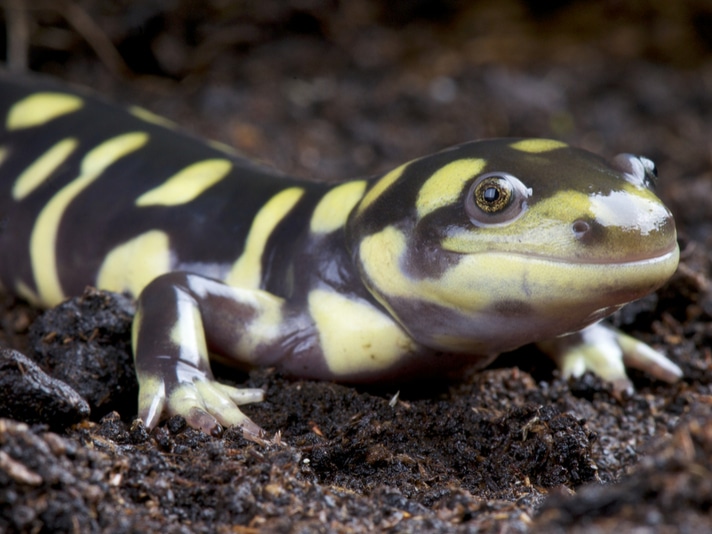 Natural Habitat: Tiger salamanders are found in areas with a consistent water supply, including forests and forest edges. They live primarily under rocks and in areas such as crayfish burrows and other small-animal dens. They also dig their own in moist, loose soil.

Captive Housing: Tiger salamanders are aquatic as juveniles and terrestrial as adults. A 10-gallon aquarium filled halfway is adequate to house juveniles. Keep water around 70 to 74 degrees Fahrenheit. Water quality is important, so use a high-quality water filter, and weekly change half the water in the tank. Use dechlorinated water, or treat tap water for chemicals. Aging water by letting it stand in an open container for a few days also works. Include a tightfitting screen top on the tank to prevent escapes. You’ll want one in place when the salamanders morph into adults.

One to three adult tiger salamanders can also be kept in a 10-gallon terrarium, but use substrate, and provide a water bowl large enough for all cage occupants to soak. Natural, chemical-free potting soil, ground-up coconut fiber or moss works as substrate. You can use just one or mix all three together. Keep substrate damp in at least half of the enclosure by misting or by mixing water into the substrate near hides. Provide a hide that fits all occupants at once, or give salamanders multiple hides. Ceramic planter pieces, pieces of plastic or cork bark, or commercial hides sold in pet stores work well. No heating or lighting is usually required. Ambient lighting and temperatures between 68 and 76 degrees is sufficient. A thermal gradient also isn’t needed.

Housing males and females, or just males, together is not a problem. These salamanders aren’t territorial, and they rarely interact except when competing for food.

Diet: These voracious predators eat almost anything they can catch and swallow. Feed them separately in another container, or just give each a serving away from others. What tiger salamanders eat depends on their stage. Juveniles eat fish, fish food, pellet turtle food and worms, such as red worms and night crawlers. Feed them every three days, and remove all uneaten food to keep the water clean. Adults eat crickets, mealworms, night crawlers, fish and pinky mice. Once or twice a week feed them as much as they’ll eat in one sitting.

What’s Available: Available in reptile specialty stores and sometimes on the Internet, tiger salamanders come in many colors and patterns, but they primarily sport a dark-brown, a greenish or a black background with yellow spots, bars or chevrons. Albinos have been found, but they don’t seem to have appeared in the pet trade yet.

Although wild populations are dropping in some areas of the range, these salamanders are common in most areas. Most in the pet trade are wild-caught, but some captive-bred tigers are offered now.

Ken Foose produced his first captive-bred snakes at age 11. With a master’s in zoology, he has been both zookeeper and curator. He opened Exotic Pets, which specializes in reptiles and amphibians, in Las Vegas, Nev., 16 years ago, and he is currently vice president of the International Herpetological Symposium.