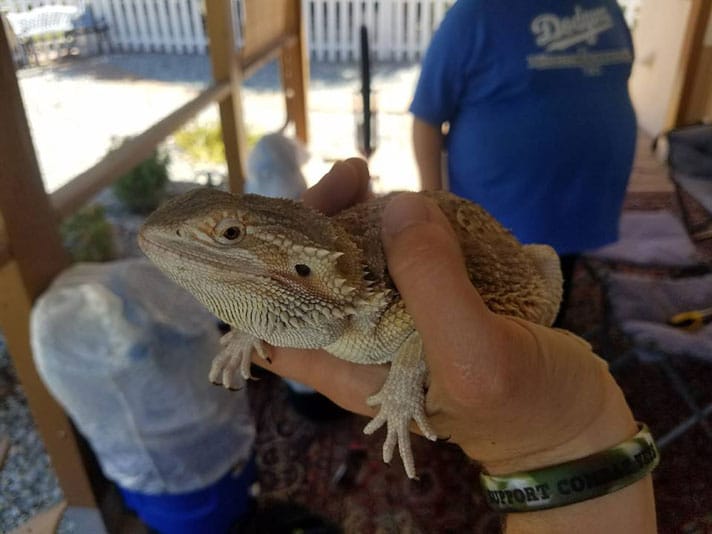 Hopefully the bearded dragon's owner will be found.

A couple from Hemet, CA ordered a bicycle on Walmart.com and when the bicycle arrived, so too did a stowaway bearded dragon (Pogona vitticeps).

Correction: the couple accidentally said that it was a delivery from Amazon Prime, however, upon further inspection they…

Al and Chris Brummett ordered the bicycle as a gift for their granddaughter, and when Mr. Brummett opened the bicycle box with the intent of assembling the bike, a bearded dragon appeared, staring right at him.

“At first I freaked out because he was so big,” Brummett said in a press release put out by Riverside County Animal Service's Public Information Office. “Here was this massive lizard looking over his shoulder at me. There he was, and he had this look, such as ‘what the heck just happened?’” he said. “And I’m thinking, ‘yeah, me too.’”

Brummet then placed a bucket over the the seemingly healthy lizard and called Riverside County Animal Services. The first responder, Officer Carra Mathewson wasn’t familiar with the species, so she called Officer Harvey Beck, who came to the residence and immediately recognized the reptile as a bearded dragon.

“Somehow that bearded dragon ended up in that box and who knows how long it had been in there. It’s a wacky tale for sure,” Mathewson said.  Officer Beck fed the reptile some canned peaches, most likely just as bewildered as Mathewson and the Brummetts. Nobody knows for certain how the lizard ended up in a bicycle box nor for how long. It is now at Riverside County Animal Services, which is working with Walmart in hopes of finding its owner. Hopefully someone can verify the popular pet lizard belongs to them and he finds his way home.