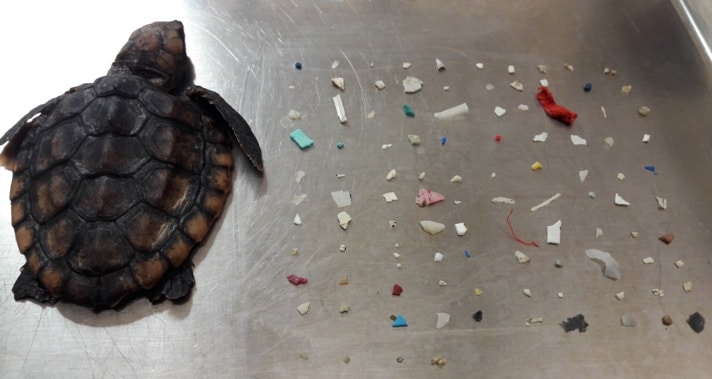 The baby loggerhead starved to death after ingesting so much plastic pollution.

A baby loggerhead sea turtle (Carreta carreta) that washed up on a Florida beach, weak and emaciated, died, and upon a necropsy, a nature center sea turtle rehabilitation assistant found 104 pieces of plastic trash in its stomach. The plastic the turtle had ingested included food wrapper pieces, to balloons and bottle labels.

"It was weak and emaciated. I could just tell it wasn't doing well," said Emily Mirowski, a sea turtle rehabilitation assistant at the Gumbo Limbo Nature Center told CNN.

Not such a happy #TurtleTuesday this week. It's washback season at Gumbo Limbo and weak, tiny turtles are washing up…

"It was really heartbreaking," she said. "But it's something we've seen for several years and we're just glad people are finally seeing this image and hopefully it's raising awareness."

The hatchling turtles usually make a beeline for the sargassum seaweed patches in the Gulf Stream, but these floating patches of seaweed are also a magnet for marine plastics that don't belong in the oceans.

"The issue is that with all the plastic in the oceans, that's where the plastic sticks," Emily Mirowski of the center said. " All the microplastics stick to the seaweed, and it looks like food to the baby turtles."

That ingested plastic gives the turtles a feeling of fullness, which causes some to starve to death.

"We give them a small amount of fluids everyday to get them hydrated," Mirowski said. "Then we hope they'll pass the plastic naturally. The important thing is getting them hydrated to get their appetite back."

The wash backs of these turtles will continue until the ocean stops becoming a trash receptacle, and people start disposing of plastics that they purchase properly.

"We have to reduce plastic use as much as possible," she told CNN. "Not just recycling, but eliminating plastic out of daily use. Every piece of plastic that's ever been made is still out there. it never goes away, it just breaks down to smaller pieces."