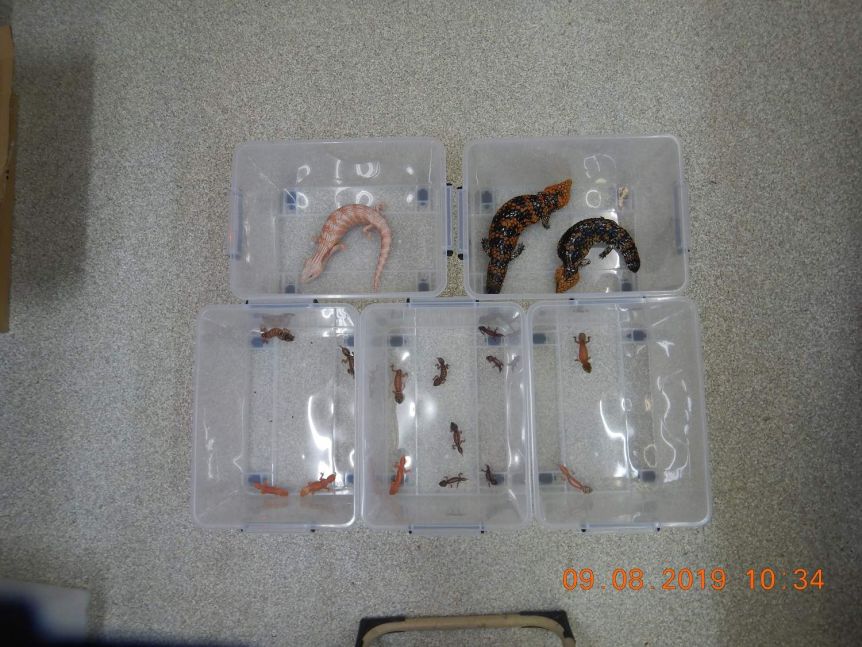 Australian postal workers who couldn’t explain abnormal shadows in x-ray scans of rice cookers, called the Queensland Parks and Wildlife Service for a

Australian postal workers who couldn’t explain abnormal shadows in x-ray scans of rice cookers, called the Queensland Parks and Wildlife Service for assistance and discovered 79 lizards packed into the rice cookers, bound and taped inside socks or cloth with no access to food or water. QPWS’s wildlife southern operations coordinator Warren Christensen labeled the way in which these reptiles were packaged as “extremely cruel,” according to ABC News Australia.

This blue-tongued skink was found bound in a rice cooker destined for China. Photo by Queensland Parks and Wildlife Service.

The reptiles, Christensen said, were destined for the illegal reptile trade. Included in the seizure was an albino blue-tongue skink (Tiliqua ssp.), and a Western Pilbara spiny-tailed skink (Egernia cygnitos).

“Thankfully these animals did not make it onto the black market, but they cannot be released into the wild because we don’t know where they were captured or if they were exposed to disease,” Christensen told ABC News Australia. “They will spend the rest of their days in captivity, taking part in breeding programs and educating the public about the illegal trade of wildlife.”

A 28-year-old Taiwanese man was arrested in the case and charged with 67 offenses including aggravated cruelty to animals and served six months before he was deported.