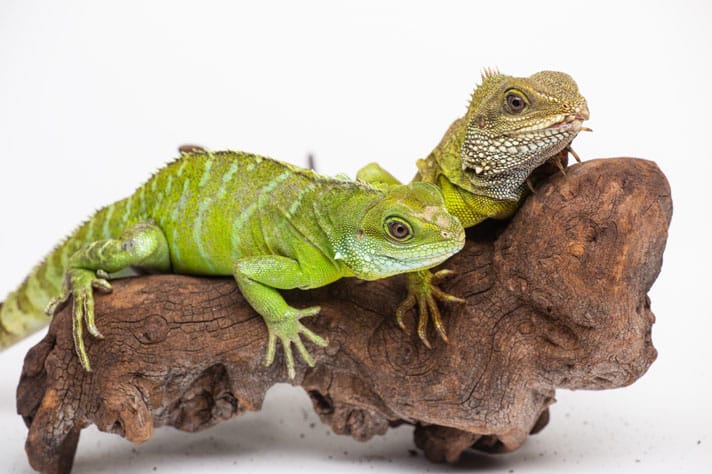 The Smithsonian’s National Zoo was the first to confirm facultative parthenogenesis in Asian water dragons.

An Asian water dragon (Physignathus cocincinus) who has been on display at the National Zoo in Washington since she arrived in 2006 at four months of age, has reproduced via facultative parthenogenesis, a rare but not uncommon occurrence in the reptile world. A paper detailing the data about this particular episode of parthenogenesis was published in the PLOS One scientific journal. It is the first known episode of parthenogenesis in this species of reptile as well as in the Agamidae family.

According to a press release put out by the Smithsonian’s National Zoo, the lizard starting laying eggs in 2009 and keepers just ignored them as they probably thought they were infertile without a male. In 2015, the keepers wanted to study fertility via sperm storage and parthenogenesis in eggs laid by female reptiles that were not bred. They incubated all such eggs for two weeks and then candled them for viability. Some candled eggs showed veins, which indicated they were viable. The first two batches the zookeepers cared for didn’t produce any offspring, but the third batch, in August 2016, produced a female, which was swabbed of its DNA for analysis. The scientists then made the determination that this female was born  “without assistance from a male,” Robert Fleischer, head of the Smithsonian Conservation Biology Institute’s Center for Conservation Genomics, said.

🦎 Life found a way at our Reptile Discovery Center! Zoo scientists are the first to confirm our female Asian water dragon underwent facultative parthenogenesis—that is, she reproduced without contribution from a male. LEARN MORE: https://t.co/uJUFr5vTKY. #Science #WeSaveSpecies pic.twitter.com/fegZV4EUgX

“These scientific discoveries are always very exciting, and having the opportunity to confirm parthenogenesis at all is really cool,” Kyle Miller, animal keeper at the Reptile Discovery Center and lead author on the paper said in the press release. “We are fortunate at Smithsonian’s National Zoo to have a Genetics Laboratory and a team of scientists who are just as excited as the animal care team to conduct these kinds of analyses. We are just scratching the surface with parthenogenesis in snakes and lizards that primarily reproduce sexually. Advances in technology continue to take research to new heights, and I hope our work inspires other zoos to pursue these types of projects.”

The next study will be on the offspring and if she will be able to reproduce.

The complete paper, "Parthenogenesis in a captive Asian water dragon (Physignathus cocincinus) identified with novel microsatellites"
can be read on the PLOS One journal web page.