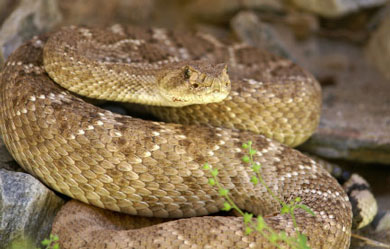 Snakes of all types come out with the arrival of warm weather in many parts of the United States.

VIdeo: Man Steps On And Gets Bitten By Snake
Keel-Scaled Boa Down Listed To Vulnerable Thanks To Conservation Efforts
Family Claims "Disney" Snake Bit Boy, Grandmother Died as Result

A 42 inch rattlesnake was found inside a backpack that was left at a school bus stop in New Braunfuls, Texas. According to KGNB 420, no bites were reported and police are unsure if the snake crawled into the pack on its own or if someone deliberately put the snake in there.

The warm weather in Texas and states in the west and southwest United States has brought out the snakes, both venomous and non-venomous from their winter dens, and school districts across the regions are warning parents and students to be mindful that snakes can be anywhere and are best left alone. Following the discovery of the rattlesnake in the backpack, New Braunfuls school district officials notified parents and students to be mindful that snakes are coming out to greet spring and are hungry and on the move.

In the beach town of Encinitas, Calif., a 1-year-old boy was bit on the finger by a rattlesnake as he played in the backyard of his home and was airlifted to an area hospital April 4. His home sits adjacent to a nature preserve that is a known area for snakes, both venomous and non-venomous. There has not yet been an update on the child's condition.

The Cruelty of Rattlesnake Roundups

In Simi Valley, Calif., the Mountains Restoration Trust has announced its 2013 Rattlesnake Avoidance Training Clinic for Dogs will be held April 20 and 21 at Headwaters Corner at Calabasas, 23075 Mulholland Hwy, Calabasas, CA, and May 26 at Corriganville Park, 7001 Smith Rd. in Simi Valley. The one on one training ($70) will teach dogs to understand what a rattlesnake looks and smells like as well as the sounds that rattlesnakes make and will teach the dogs to avoid the snakes. More information on the training can be found here.

In addition to rattlesnakes, Texas is home to three other types of venomous snakes: coral, copperheads, and cottonmouth snakes.

In Arizona, two wet winters has resulted in plenty of prey items for rattlesnakes, and the state's Arizona Game and Fish Department expects more sightings as the weather stays warmer, though it is easy to avoid getting bit. “The No. 1 thing is to always know where you're putting your hands and your feet,” Zen Mocarski, the Arizona Game and Fish Department's information and education program manager for the Kingman region told the Cronkite News Service. Mocarski said that the demographic for those who get bit are males in their 20s. "Partying in the desert can definitely lead to people doing stupid things like trying to pick up a rattlesnake,” he said. “And then they're trying to impress the females and that also leads to some bad decisions.”

The best advice to avoid getting bit? Mocarski says to back away and create a wide berth to avoid striking range and go around the snake.