A U.S. Fish and Wildlife Service grant to study the effects of Everglades restoration on eastern indigo snakes (Drymarchon corais couperi) has yielded mostly good news for this threatened and protected species.

According to a report from News Press, the study, which was conducted on a 60,000 acre abandoned citrus grove in Martin County has determined that the area has a healthy population of indigo snakes. Florida Gulf Coast University researchers in November 2011 captured and implanted passive integrated transponders into eight indigo snakes to monitor where they traveled around the survey area. 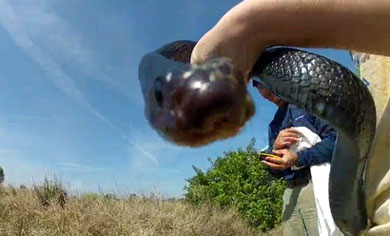 Researchers tracked the snakes twice a week and determined that four of the snakes have since been killed. The remaining four, two females and two males remain in good health in the habitat in which they were found. The snakes were about 6.5 to 7 feet in length. Based on the concentrations of indigo snakes in the citrus grove as well as the number of juveniles that the researchers have encountered, they estimate the population of indigo snakes in the grove is in the hundreds.

"There's something about these snakes," FGCU junior Chelsie Houston told the News Press. "They're just so cool. They're very laid-back. They'll rattle their tails and hiss a little bit to let you know they're upset, but they're harmless.” The study addresses whether these snakes can be relocated in the event that a given area is slated to be bulldozed for restoration or some other purpose. And based on what the researchers are seeing, they believe that there are ways to mitigate any impact on restoration or projects.

The eastern indigo snake can be found in Florida, eastern Georgia, southern Alabama, and Mississippi. The snake is a federally threatened species and certain restrictions are in place with regard to possessing them. A member of the Colubridae family, indigo snakes feed on a variety of animals, including small mammals, amphibians, birds, lizards, baby turtles, and snakes, including every species of venomous snake found in Florida.