Video: American Bullfrog’s Attempt To Snatch Dragonfly Off A Branch Ends In An Epic Fail

Dragonflies are one of the most adept arthropods in nature, capable of hovering, diving, flying backward, upside down, pivoting 360 degrees and flying at up to 30 miles per hour. The dragonfly's wings beat so fast that animators of the opening dragonfly sequence in the 1997 movie Men in Black added three wings to each side of their 3D dragonfly to create a realistic beating of the wings. Two animated wings weren't fast enough. This speed gives them the capability to often escape being a prey item of frogs and other animals that enjoy eating them. 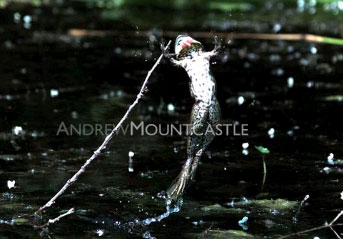 A New York Times report that details the dragonfly and its intricacies shows the speed in which it can evade capture. Andrew Mountcastle of Harvard University captured an American bullfrog in super slow motion video as it leaps, mouth agape with its tongue sticking out, in a failed attempt to grab a dragonfly perched atop a branch above the surface of a pond. The frog is so striking in its failure that Mountcastle titled the videos frogfail1 and frogfail2. The frog was so sure that it had the dragonfly in the bag that it even extended its front limbs out to shovel the seemingly hapless dragonfly into its mouth. But the dragonfly had other ideas, like the notion that it wanted to survive to fly another day, so it bailed, leaving the frog with an empty stomach.

The American bullfrog (Lithobates catesbeianus) is one of the largest frogs in the world, growing to close to 10 inches in length. Its native range is the United States, Canada and Mexico, and is an introduced species in much of the western United States and are considered an invasive species in 15 countries in which the frog has been introduced. It is found in streams, ponds and rivers and spends most of its life in the water.