Photo Shows King Cobra And Reticulated Python Caught In Deadly Embrace
Video: Man’s Best Friend In India Saved From Python By Man
Back to Nature: Is It Wrong To Keep Wild Snakes

A new species of egg-eating snake has been discovered in the Cardamom Mountains in south west Cambodia. The snake, named the Cambodian kukri (Oligodon kampucheaensis) was named after the country in which it was found. Neang Thy, a Cambodia Ministry of Environment officer who works with Fauna & Flora International (FFI) discovered the snake with Dr. Lee Grismer and Dr. Jenny Daltry. 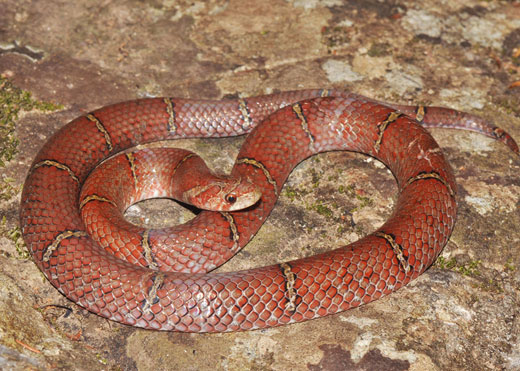 “Cambodian science was smashed under the Pol Pot regime, and only now are we picking up the pieces. It gave me a great sense of pride to both discover and describe this species, and to name it in honor of my country,” Thy said in a statement released by FFI. “Most kukri snakes are dull-colored, but this one is dark red with black and white rings, making it a beautiful snake.”

The kukri snake is a rainforest species that eats eggs as its principle food source. It has rear curved teeth that apparently are similar in shape to a Nepalese knife known as the kukri, hence the name. According to FFI, the snake is under threat due to habitat loss and land conversion, and is the second reptile FFI has described in Cambodia in 2012.