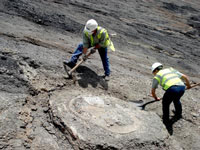 Remarkable fossil finds in the vicinity of the Cerrejón coal mine in northern Colombia have revealed the presence of mega-reptiles that lived in this region some 60 million years ago. They included Titanoboa, the world’s largest known snake which could attain a length of up to 50 feet , not to mention Carbonemys, a freshwater turtle as big as a smart car. 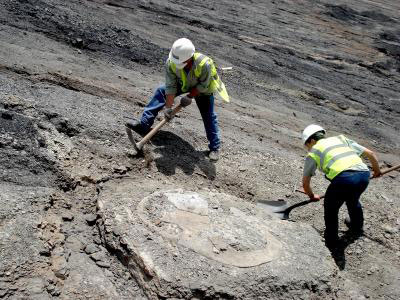 Paleontologists unearth the distinctive circular carapace of the giant turtle, Puentemys, which lived 60 million years ago in a hot tropical forest environment.

Paleontologist Carlos Jaramillo's group at the Smithsonian Tropical Research Institute in Panama and colleagues at North Carolina State University and the Florida Museum of Natural History have now unearthed the remains of another huge turtle here. Discovered in the La Puente pit, it has therefore been named as Puentemys mushaisaensis.

It had a shell length of at least 5 feet, but perhaps the most remarkable characteristic of this new chelonian is the appearance of the shell itself.  This is almost entirely circular, resembling the shape and size of a very large car tire. According to Edwin Cadena, a post-doctoral fellow at North Carolina State University, this unusual shape most likely created distinct survival advantages for the turtle. 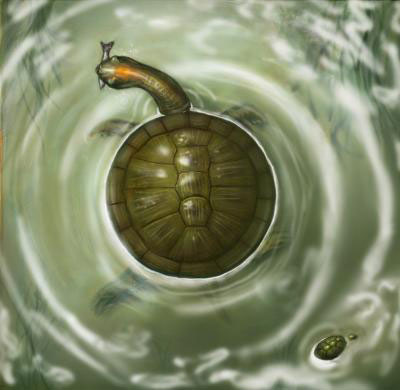 The rounded shape of this fossil turtle, found in the Cerrejón coal mine in Colombia, probably helped it to warm up rapidly in the sun.

Puentemys’s shell was also relatively flat, which would have lessened water resistance when these huge turtles were swimming This would have meant that they could swim very efficiently, attaining good speed with minimal effort and relatively little drag.

Meanwhile, out of the water, the shape of its shell would have probably enabled Puentemys to take maximum advantage of the sun’s rays, helping it to warm up quickly and remain active. This feature may have contributed to improving its metabolism, possibly even enabling it to grow to such a large size overall.

There was also probably at least one of other benefit for Puentemys linked with its shell, as it lived in an era of giant reptiles. The researchers believe that large specimens of Puentemys would have been too large to be preyed upon by Titanoboa. The snake would simply not have been able to fit the turtle’s shell into its mouth.