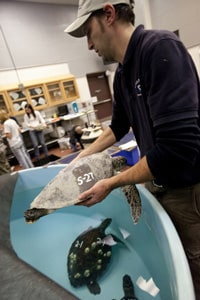 University of Florida veterinarians have conducted health assessments, treatment and release efforts for more than 80 sea turtles after record cold temperatures in January posed a severe health risk to an already endangered species.

The unprecedented cold snap of below-freezing temperatures for several days resulted in an initial influx of 25 green sea turtles, which turned into more than 80 that received care and support from UF veterinarians.

Some 5,000 “cold-stunned” sea turtles were collected from the sea at various locations and transported to rescue facilities throughout the state during a 10-day period. About 20 percent of those turtles died, according to the university.

The rest have been released back into the wild or are being cared for by various rehabilitation facilities. Some of the turtles were actually responsive between 12 to 24 hours and could be released, said Dr. Brian Stacy, a clinical assistant professor in UF’s Aquatic Animal Health program and a contract veterinarian with the National Marine Fisheries Service.

“We were identifying those with buoyancy issues, severe tumors, turtles with eye problems or that showed other types of trauma,” he said. “We were also concerned about turtles that were very thin, since those would need to be kept longer.”

The rescue efforts involved housing as many fibropapilloma turtles as possible so that other rehabilitation centers that don’t keep those kinds of turtles would not have to deal with the biosecurity that the condition requires, Dr. Stacy said. Fibropapillomatosis is associated with a virus and manifests as wartlike growths.

Veterinary professionals try to keep infected turtles separate from turtles without the condition for health reasons. Fibropapillomatosis is 40 percent to 60 percent prevalent in one of the primary areas affected by the cold.

Dr. Stacy said the weeklong rescue effort was challenging for many who volunteered to help, but that the overall response was “incredibly positive.” It remains unclear what effects the recent freezes will have on sea turtle populations.