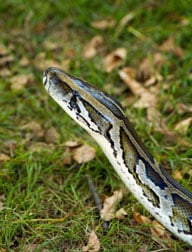 The city of West Fargo, North Dakota voted July 16 to uphold its local ordinance banning constricting snakes and other "exotic animals" after resident Robert Butts III requested a change to the city ordinance to allow constricting snakes to be kept as pets in the city. Butts III owns an 8 foot Burmese python (Python molurus bivittatus) and a 4 foot mountain kingsnake (Lampropeltis pyromelana knoblochi).

According to a report in the West Fargo Pioneer, city commissioners voted 3-1 against changing the ordinance that bans constricting snakes and any "poisonous, venomous, constricting, or inherently dangerous member of the reptile or amphibian families, including rattlesnakes, boa constrictors, pit vipers, crocodiles, or alligators.” Butts told the commissioners that constricting snakes should be allowed because he said the ordinance has gray areas, and the adjacent cities of Fargo and Moorhead don't have restrictions in place for constricting snakes. The city initially heard about Butts' ownership of the Burmese python after he took it to a local park so it could slither in the grass and bask in the sun. Park patrons became concerned and talked with Butts and ultimately called the police, who informed him that the python was not allowed in the city. 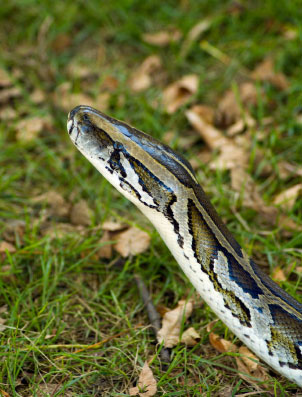 Burmese pythons and other constricting snakes are banned in West Fargo, North Dakota.

The Burmese python is a large constricting snake that can grow to more than 20 feet in the wild. Native to Burma and other countries in Southeast Asia, it is a powerful snake that has been called by those who keep them the gentle snake among giants, based on its largely passive demeanor. It is an invasive species in the Florida Everglades and its importation and state to state transportation has been banned by the U.S government.