Before I keep a species, I like to know the conditions of its native habitat. The Chinese crocodile lizard (Shinisaurus crocodilurus) is found in a small range around the town of Mengshan in southern China’s Guangxi Zhuang Autonomous Region. Recently, some populations have also been found along the bordering areas of North Vietnam.

Crocodile lizards prefer slow-moving water and small ponds 5 to 8 feet in diameter and 2 feet deep. Vegetation such as Phyllostachys bamboo, Cupressus funebris and Acer kwangsiense surround these waters. Weather conditions are similar to northern Florida. In January, it may freeze but not much, and often only two to three night frosts occur during the month. Precipitation is high and occurs mainly in the spring and summer with 7 to 8 inches of rain per month. Summers are hot and humid. In the fall and winter, the precipitation is much less. Only 1 to 2 inches of rain fall per month. 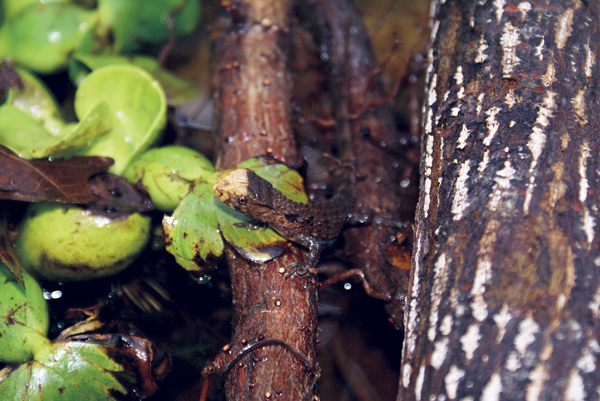 Tailoring your enclosure to resemble the Chinese crocodile lizard’s native habitat will help them thrive well in captivity.

In central Alabama, where I live, it’s easy to recreate this climate outdoors. I make sure my terraria are warmer and drier in the winter. To accomplish this, I cover them with transparent sheets of plastic.

Fungal infections are Chinese crocodile lizards’ main problem. In nature, these lizards sleep on plants at night with their noses to the wind, so they experience ideal air circulation. When they’re kept in terraria, the horizontal ventilation is greatly reduced. Add high air humidity to this situation, and it often leads to fungal skin diseases, which Shinisaurus babies are very sensitive to.

When keeping Chinese crocodile lizards indoors, lizardkeepers can prevent poor air circulation by using a terrarium with a screen on two opposite sides and a computer ventilator. When lizards are kept outdoors during the warm season, this ventilation problem does not exist. However, keepers must make sure a lizard’s hiding place on land does not get too moist; otherwise this will lead to fungal skin disease in animals of all ages.

I had one Shinisaurus baby that had the disease quite badly. Other offspring had intimidated and bitten it, as well. Moving an already stressed lizard to another terrarium causes additional stress, and keepers often underestimate this. Therefore, I removed the other babies and kept the weakling in the same terrarium, which minimized stress to the baby. I treated it with Thermazene and Sporanox, and it recovered in just three weeks. 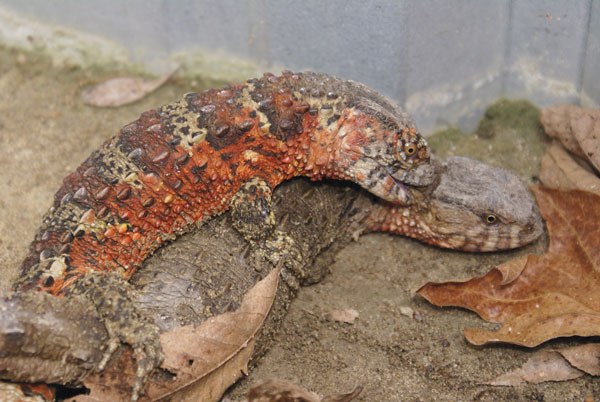 In nature two to seven Shinisaurus babies are born in April and May, and copulation takes place in August

Cold water is another condition I suspect could lead to health problems and possible death. During the winter, I never see Shinisaurus in the water. Covering terraria with plastic can help retain the habitat’s warmth and ensure the health of your animals.

3. Know Your Males From Females.

After sexing 60 Chinese crocodile lizards 1 or 2 years old in my colony, I found there were as many males as females. For breeding purposes, you can keep them in pairs, but you can also keep single females and rotate males for copulations.

Breeders may try to sell surplus males for this reason. If you want to buy and breed this species, it is advisable to purchase babies that are feeding well. They should be more than 4 weeks old but no older than 2 to 3 months.

Unfortunately, numbers in the range of .066 to .068 are not a good indicator of sex because they overlap between the sexes, but this method is a good way to know the sex about 90 percent of the time.