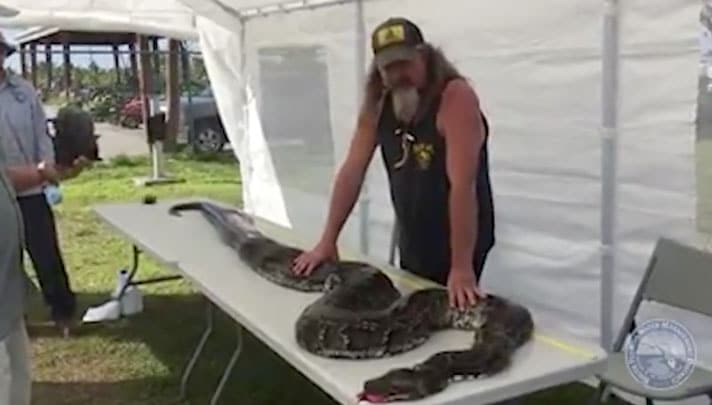 The nearly 17-foot Burmese python is a personal best for hunter Dustin Crum.

A Burmese python (Python molurus bivittatus) measuring 16-feet, 11 inches and weighing 122 pounds was captured November 2 in Everglades National Park as part of a government-sponsored competition to rid the park of the invasive species.

Python hunter Dusty Crum broke his own record in capturing the snake. Crum’s team won the competition last year with a 16-foot snake, his largest, and 33 snakes captured, and took second place in 2013.

“It was an unbelievable match. I’ve never been tested like that before,” Crum, who is an orchid grower, told WFLA 8 News. ““We’re taking them out of the Glades one snake at a time. It won’t hurt any more of our natives.”

The South Florida Water Management District Governing Board’s Python Elimination Program ran a pilot program from March 25-June 1, 2017 in an effort to gauge the effectiveness of paid hunters. The governing board selected 25 hunters, who collectively captured 158 Burmese pythons weighing 3,725.2 pounds and measuring a total 1,369 feet. It cost the board $49,504 in wages. Phase 2, which ended September 7, netted an additional 436 pythons.