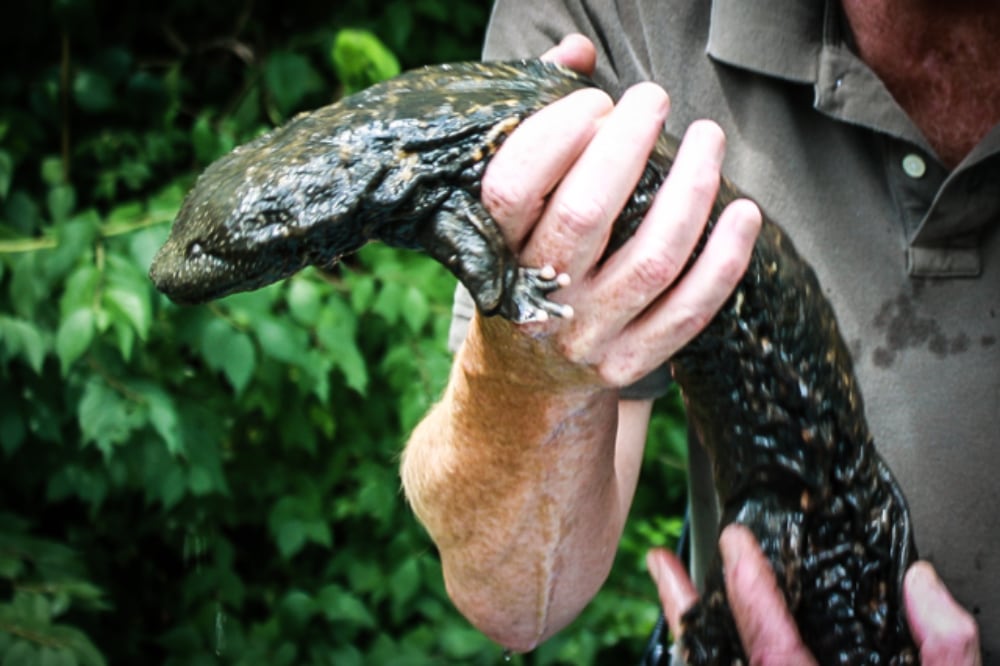 The initial release of the 29 amphibians culminates a six year effort to breed, raise and release these salamanders, one of the largest in North America.

The hellbender headstart program was launched because researchers were seeing less and less juvenile hellbenders and fewer adults in the rivers they inhabit.

“This lack of recruitment into the population indicated something was likely causing a low survival rate of eggs or larvae,” the soo wrote on its website. “With this slow decline over several decades, hellbenders had disappeared from most of their formerly extensive range in Tennessee. The Zoo collected eggs from the wild and raised the giant salamanders for six years until they were young adults and then released them back into the wild.”

The salamanders are outfitted with transmitters that will enable the researchers to monitor their movements to help gauge the success of the program.

The zoo still retains 140 hellbenders in its Native Aquatic Conservation Center. These will be released in the next several years as well.

About the Hellbender Salamander

Hellbender salamanders are flat and their skin is folded and wrinkled. They breathe by absorbing oxygen through their skin, which is covered in mucus that is toxic to predators but not humans. Listed as Near Threatened by the IUCN, the eastern hellbender grows to more than two feet in length and is found in streams in the eastern United States to Mississippi. They are fully aquatic salamanders and don’t leave the water. They develop skin lesions when exposed to highly polluted waters. Nocturnal, the hellbender feeds on crayfish, dead fish, insects and other amphibians. They are prey to fish, turtles and snakes. They reach maturity in five to eight years and can live up to about 30 years.