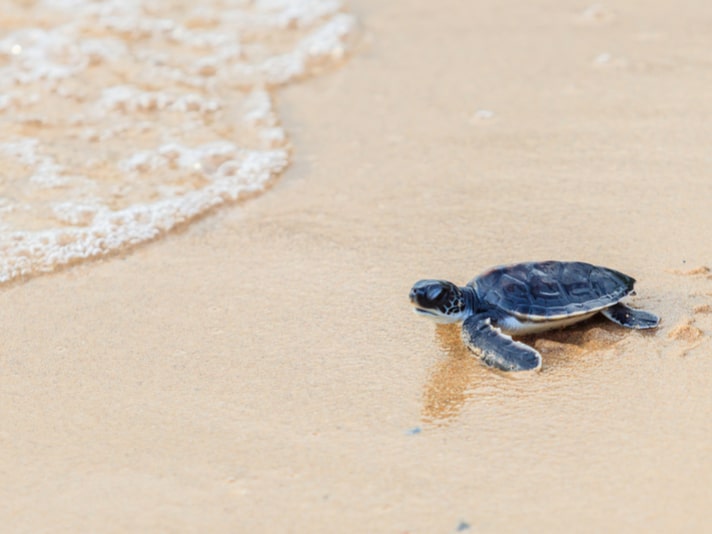 As a kid I always enjoyed watching the outdoor shows such as Wild Kingdom, Nature, and others, and my all time favorite animal featured on those shows was the sea turtle. I especially liked watching them hatch and wallow toward the water's edge. The sad part was watching them get picked off by sea birds and the crabs that would grab them and make meals out of them. It would make me want to go to those beaches to make sure every one of them made it into the water.

While scientists know that the baby turtles do head straight for the water (Most of the time as they can get disoriented from light posts and other man made lighting), they don't know a lot about where sea turtles go in the ocean. A National Oceanic and Atmospheric Administration study at the Waikiki Aquarium in Honolulu hopes to shed some light on what happens with these baby turtles after they hit the water.

"They hatch out of their eggs. They go into the ocean, and we don't see them for a while," biologist Malini Parker told local Honolulu news channel KITV4. "You won't see them until they are either sick or it's time to nest," Parker said.

The study involves four young Hawaiian green sea turtles (Chelonia mydas) locally known as honu, that are about two years old and about the size of a small dinner plate. The turtles will be outfitted with satellite tracking devices in an effort to find out where they go. These sea turtles are different from other sea turtles in that while most sea turtles spend their entire lives in the ocean, only coming to shore to nest, the Hawaiian green sea turtle is known to haul out on Laniakea Beach on the North Shore of O'ahu.  They first began hauling out on the beach, also known as Turtle Beach about 15 years ago. Scientists don't know why they haul out only on that beach to bask.