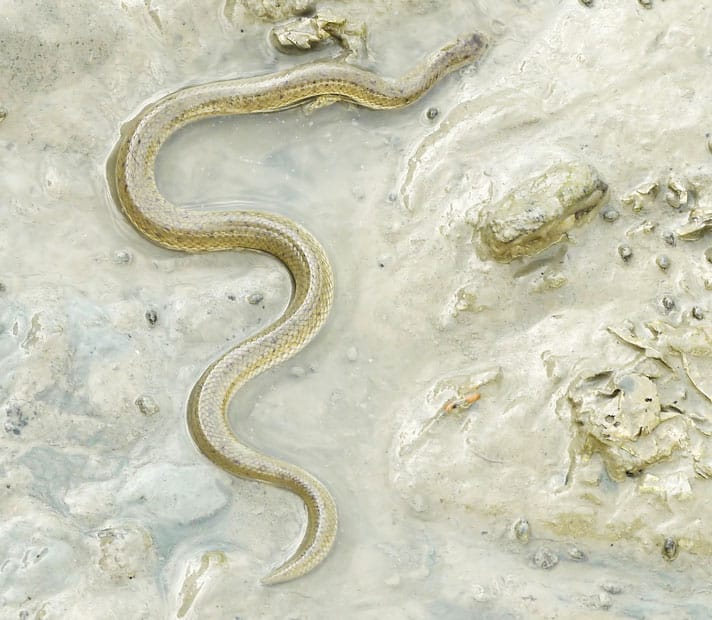 These Southeast Asian snakes dine on crustaceans in unique ways, unlike other snakes.

Did you know that there are several Southeast Asian snake species that feed on crustaceans? And did you know that one of these species actually tears apart its prey into more bite-sized manageable pieces? 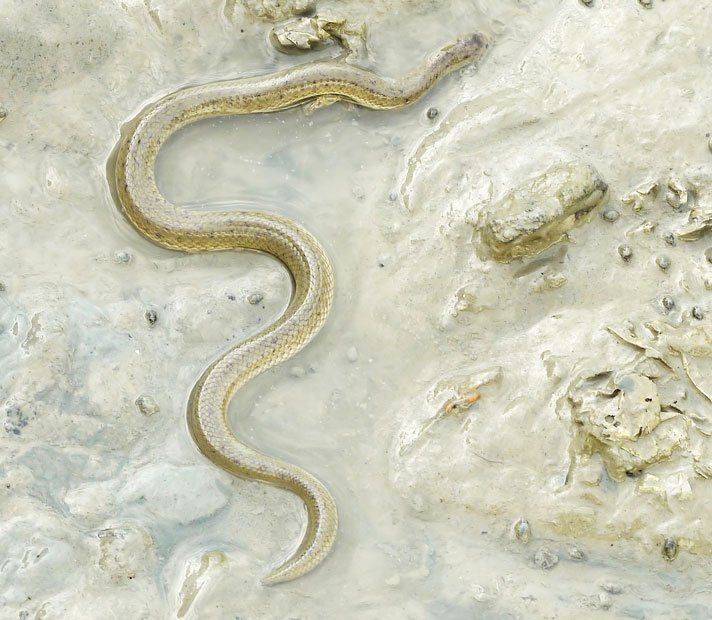 University of Cinncinati Biologist Bruce Jayne has been studying these water snakes for more than 30 years, detailing the feeding habits of three mildly venomous water snakes: Fordonia leudcobalia, which feasts on hard-shelled crabs; Gerard's water snake (Gerarda prevostiana) which prefers soft-shelled crabs that are freshly molted and Cantor’s mangrove snake (Cantoria violacea), which feeds on snapping shrimp. He published his findings last month in the Biological Journal of the Linnean Society

Of the three, Gerard's water snake rips freshly-molted crabs into bite-sized chunks, and then swallows those chunks whole, which is interesting considering snakes usually eat their prey whole. And time is of the essence for this snake, as the crabs it hunts molts their outer shell and are only soft for about 45 minutes before the shell hardens. So the crab has a 20 minute window to feast on the crustacean, Jayne told University of Cinncinati Magazine.

“That’s one of the nice things about studying anatomy and behavior. You know the evolutionary relationships. You can find some counterintuitive patterns,” Jayne said. “It appears that this specialty in feeding on soft-shelled crustaceans popped up after they were already feeding on hard-shelled crustaceans.”

Check the video showing how Gerarda prevostiana tears apart the crab into pieces it can swallow.

With Fordonia leucobalia, the hard-shelled crab specialist, it takes a novel approach to feeding. Rather than grabbing its prey with its jaw and devouring it, or squeezing the life out of it like constrictors, Fordonia leucobalia first pins the crab with its chin, and then uses its body to manipulate the crab to better swallow it.

“Despite the great diversity of feeding behavior among the world’s 3,000 snakes, it virtually always starts and ends the same way — with an open-mouthed strike and swallowing the prey whole. Even in venomous snakes, they may strike the prey and release it,” Jayne said.

Virtually being the keyword. These snakes are an exception.

Jayne also refuted a previous notion that Fordonia leucobalia crushed the crabs it ate with its jaw, which some scientists had speculated was the only way the reptile could consume such a hard meal.

“When we had Fordonia regurgitate the crabs, they were still alive and ran away,” he said.

So what is next for Jayne? He wants to study a Malaysian water snake that has a huge tooth on the roof of its mouth that is larger than its rear fangs.

The complete research paper can be read on the Biological Journal of the Linnean Society website, here.