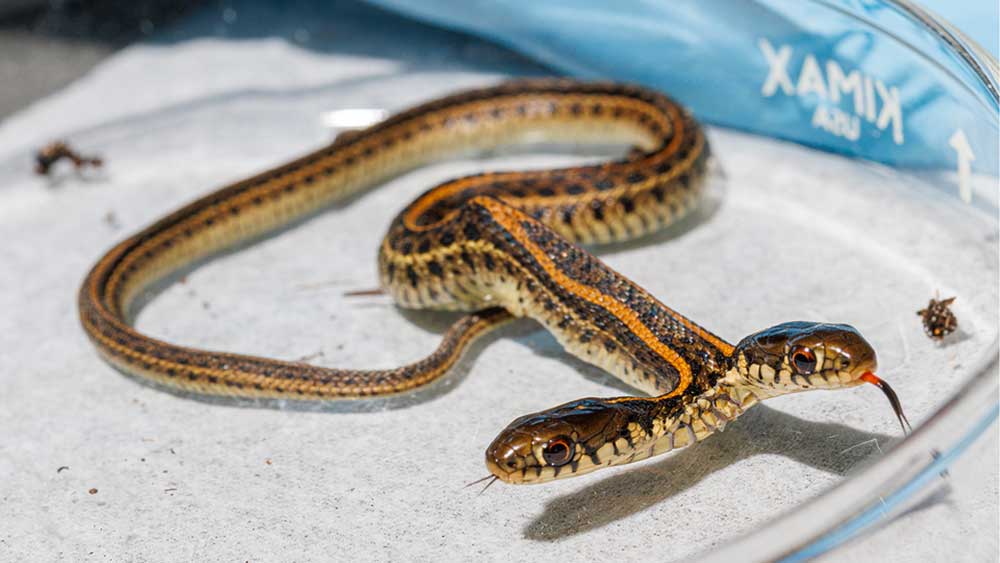 The University of Nebraska–Lincoln’s herpetology lab has received a two-headed plains garter snake (Thamnophis radix) that was found near the university on Sept. 4. Joshua Marshall, a resident of Hastings was clearing brush when he happened upon the bicephalic garter snake.

“I lifted up a log and wasn’t surprised to see two small snakes, but then I realized that they weren’t making great progress because there were two heads,” Marshall told the University of Nebraska’s Nebraska Today.

Marshall captured the hatchling reptile and then contacted a conservationist, who then contacted the university. It just so happened that Prof. Dennis Ferraro of the university’s School of Natural resources was doing field work near where the reptile was found and was able to retrieve it.

“The snake is as rare as about one in 100,000,” Ferraro said. “Usually when snakes have two heads one will take over,” he said. “This one has two necks, which means that neither will become dominant. The two heads operate independently and eat independently. This would have made it difficult to survive in the wild.” Ferraro also told Nebraska Today that one centimeter of spine is connected to each head. He is not sure what is controlling the back half of the snake.

The snake is still too small for x-rays, Ferraro said. He plans to care for it until it is big enough for observational studies. He maintains a pair of every reptile and amphibian that is native to the state in his lab, and the two-headed garter snake will be part of his curriculum. “I’ll definitely let students see it, especially when we’re going over genetics and mutations,” he told Nebraska Today.

Of all North American snake species, the garter snake are probably the most common snake encountered by people, and are widely distributed throughout the continent. The genus in which they belong, Thamnophis has at least 35 species and various subspecies. The most common species kept in the hobby include the checkered (T. marcianus), eastern (T. s. sirtalis) and Plains (T. radix) garter snakes.