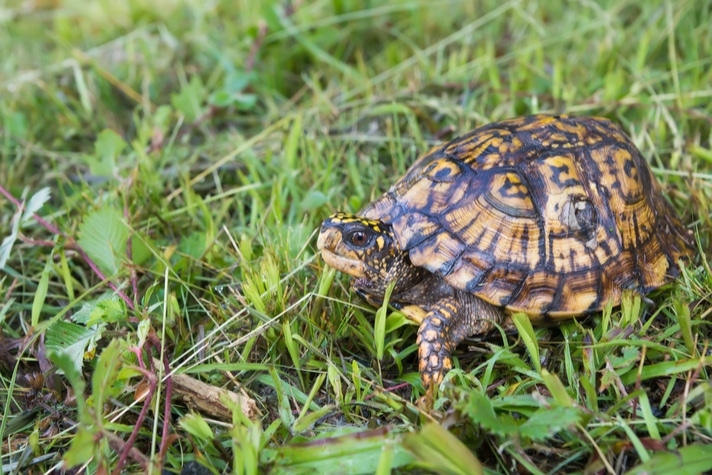 Brumation is common for box turtles throughout most of their natural range. The lack of food, cold weather and dry conditions all conspire t

Brumation is common for box turtles throughout most of their natural range. The lack of food, cold weather and dry conditions all conspire to induce three-toed box turtles to hibernate for up to five months out of the year. Brumation does not always happen without certain dangers, and many wild and pet box turtles actually die as a result. Although winter can be a perilous time for box turtles, preparing the box turtle and providing the proper type of hibernaculum will permit pet turtles to overwinter safely. 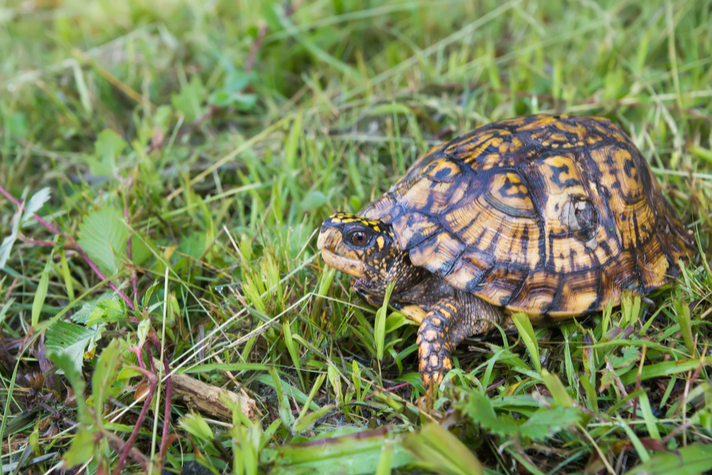 Brumation is common for box turtles throughout most of their natural range.

Around October, box turtles kept in outdoor pens will begin to have reduced appetites. Some turtles housed indoors may also begin to refuse food as they respond to subtle changes in their environment and attempt to brumate. It is dangerous to let box turtles become dormant at room temperatures. Increase the amount of time the full-spectrum lighting is kept on to 14 hours a day. Make sure the humidity in the indoor habitat remains high and keep nighttime temperature above 75 degrees Fahrenheit. These changes mimic summer-like conditions and will usually keep your indoor turtle active all winter.

Three-toed box turtles kept outside in their natural range can be safely brumated if some precautions are taken. Box turtles can hibernate in the ground, in a modified refrigerator, or in a moist, sphagnum moss-filled box placed in a shed, crawl space, attic or garage, as long as the temperature can be maintained in the safe range. The primary consideration for any artificial hibernaculum is the capability of maintaining a temperature range between 40 and 48 degrees Fahrenheit and humidity between 75 and 80 percent. Choose the best option for your situation. Refrigerators are a good choice when hibernating turtles in warm-climate regions or for turtles housed indoors.

It is not necessary to brumate pet box turtles. Very young or newly acquired turtles should not be brumated, but they should be kept in indoor habitats during the winter. If your area is unsuitable for safe brumation due to climate, predators or unsuitable soils, do not allow them to brumate in the ground. Instead, use artificial hibernacula or keep them active all winter in indoor habitats. Only healthy box turtles that have eaten well all summer should be hibernated. Turtles that have recently recovered from illness or currently have swollen or closed eyes, discharge from the nares or mouth, runny stools, swellings on the head, are underweight, or have open wounds or prolapsed organs should not be hibernated. When any of these symptoms exist, have them examined by a veterinarian. 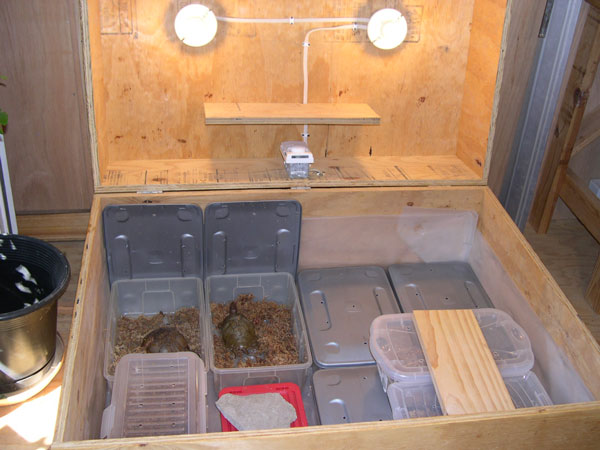 For those turtles that can be brumated safely, here is a list of things to attend to:

Offer more vegetables rich in vitamin A during the last month of warm weather. These include sweet potatoes, carrots, pumpkin and winter squashes. You can also add a few drops of cod liver oil to food or a soluble or liquid vitamin-A-rich supplement to the water once a week for a month before they stops eating. Be careful not to overuse vitamin A supplements because hypervitaminosis A can occur. Overdosing vitamin A can cause skin redness and peeling, as well as liver disease. Daily soakings a few weeks before actual hibernation will facilitate the clearing of the turtle’s intestine of wastes.

If you plan to hibernate your turtle outdoors, prepare a pit-type hibernaculum within its pen. The area should not flood during springtime rains and be above the water table. In late summer or early fall, use a shovel to loosen up an area at least 3 feet square by 2 to 3 feet deep, depending on the freeze depth in your region. Remove some of the dirt and mix in composted leaves, peat moss and grass clippings. After the turtle has entered the pit, add enough mulched leaves, straw and grass clippings to create several feet of overlying mulch. If you have several turtles, make the pit larger or dig another. If your region gets a lot of rainfall, create an overhanging shelter using plywood board and bricks or cement blocks. Be aware of predation by rats, raccoons and other animals. If you see any signs of disturbance to the hibernaculum, remove the turtle and housed it indoors for the rest of the winter.

If you are concerned about predation, or if the outdoor pen is unsuitable for brumation, an artificial hibernaculum is another option. After outdoor turtles have ceased eating and have been soaked daily for several weeks, they can be placed in individual plastic boxes that have been half filled with moist moss and have a dozen small holes drilled into the top and sides. The containers are then placed in an insulated brumation box that is located in an outbuilding, crawl space, garage or cold closet. The primary concern for the location of the brumation box is the ability to maintain a temperature range of 40 to 48 degrees. If the area remains too warm for long, or goes below freezing, it is not suitable for the hibernation box.

Three-toed box turtles housed indoors can be kept active all winter long by maintaining peak summer-like conditions. If turtles kept indoors, or turtles living in areas with year-round warm climate are to be hibernated, use a modified dorm refrigerator to provide a short hibernation period. The dorm refrigerator should be dedicated for turtle brumation only; the temperature would be too high to keep foodstuff safe. Use a digital thermometer for accurate monitoring, and adjust the refrigerator thermostat to obtain a stable temperature between 40 to 48 degrees. Place each turtle in a medium-size plastic container half filled with moist sphagnum moss. To insure a regular exchange of air, drill a dozen small holes on the top and sides of the container. It is important to open the refrigerator door for a few minutes two or three times a day to provide a fresh supply of air in the refrigerator. Turtles brumated artificially should be removed from the refrigerator every three to four weeks and allowed to warm to room temperature, then soaked in tepid water for 15 to 30 minutes. Check to be sure the moss is still moist, replace the turtle and resume hibernation. Refrigerator hibernation can be as short as eight weeks and should not exceed three months.

Three-toed box turtles that have been brumating outdoors begin to stir when daylight lengthens and daytime temperatures reach into the 60 degrees. They will often bask in the sun and increase their body temperature enough to become active. They should be provided with fresh water as soon as they are moving about, but do not offer food until they have warmed sufficiently for digestion, which can take up to two or three weeks, depending on the air temperature. This is a good time to provide items found normally in spring, such as mushrooms, greens and fresh berries. Turtles that have been artificially hibernated should be removed from the refrigerator and allowed to come to room temperature, then soaked in room-temperature water for several hours. They are now ready to be placed in their thoroughly cleaned and refurbished indoor or outdoor enclosures.

Tess Cook started Box Turtle Care and Conservation Website in 1997 and in 2008 wrote the book, Box Turtles, about the care of both Terrapene and Cuora box turtles. She has been active in the conservation and rehabilitation of North American box turtles for more than 20 years and has been fortunate to live in areas where box turtles are still common. She has ample experience observing turtles in the wild. In 2000, she started the YahooGroups boxturtlelist, where she and other long-time box turtle owners share information about the proper care of pet box turtles. Visit her website at boxturtlesite.info and find her book at pet stores and at amazon.com.