Golden Poison Frog Gets A Sanctuary In Colombia

Approximately 124 acres of Colombia's Chocó forest habitat where the golden poison frog (Phyllobates terribilis) can be found has been turned into a nature reserve by the World Land Trust, American Bird Conservancy, and Global Wildlife Conservation, in an effort to protect this endangered amphibian from extinction. The frog's habitat is shrinking due to illegal gold-mining and illegal logging. The reserve is owned by ProAves, Colombia's leading conservation organization. 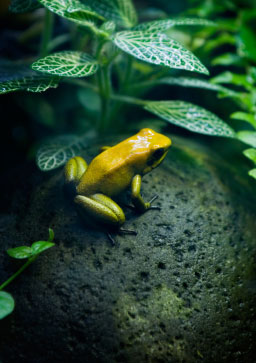 The golden poison frog is considered one of the most deadliest animals in the world with enough toxin on its body to kill 10 human adults.

In addition to protecting the frogs, the reserve will also protect several birds that also inhabit the rainforest, including the endangered Baudó Guan (estimated 10,000-20,000 birds left in the wild), Brown Wood-Rail (1,000-2,500 birds left in the wild), and Great Curassow (10,000-60,000 birds left in the wild).
The reserve serves as the starting point for a project called the Chocó Corridor in Colombia, which will connect threatened habitats with each other, from the Pacific coast mangrove forests to cloud forests high up in the western Andes mountains. The corridor as well as the Golden Poison Frog Reserve is supported by Conservation International, the International Union for the Conservation of Nature (IUCN), the Beneficia Foundation, and private donors.

The golden poison frog, also known as the golden dart frog, is considered one of the most deadliest animals in the world with enough toxin on its body to kill 10 human adults. It is pale yellow to a golden yellow as well as orange and yellow-orange in color. Just two inches in length, the golden poison frog feeds primarily on ants, termites, and beetles in the wild. The frog's alkaloid poison prevents nerves from transmitting impulses which leads to heart failure. The species is also a social animal, typically living in groups of four to seven frogs. Females also watch over their eggs until they become froglets, where they are then introduced into the frog's social unit.