The boreal toad (Bufo boreas), a candidate for the endangered species list, and in decline due to such factors as habitat destruction and the Chytrid fungal disease that has devastated amphibian populations worldwide, has friends at Mississippi State University who are working to create a captive breeding program with the Memphis Zoo to help bolster the amphibian's wild populations. The toad, native to the Colorado Rockies has been in decline for several years and was placed on the candidate list for Endangered Species Protection in April 2012. 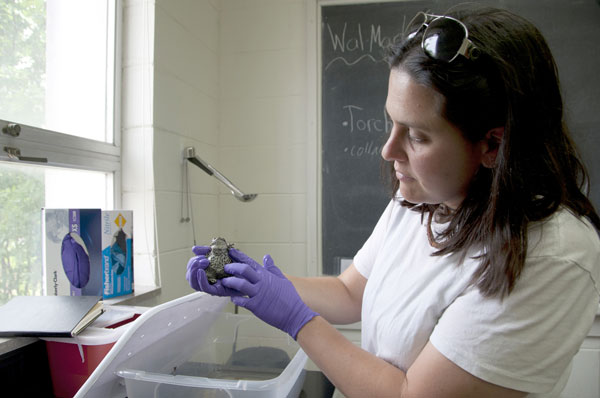 Nat Calatayud, a post-doctoral fellow shown here holding Diane, is researching how to get the endangered Boreal toad to breed in captivity.

Under supervision of Scott Willard, head of the department of biochemistry and molecular biology, entomology and plant pathology at MSU and Andy Kouba of the Memphis Zoo, post-doctoral fellow Nat Calatayud will lead the reproduction efforts. Currently Calatayud is working on a reproduction protocol and is trying to get the toads to reproduce without hibernating. In the wild, hibernating is a trigger that leads to reproduction, so the scientists are attempting to determine what hormones they can give the toads so they will reproduce without having to hibernate.

The boreal toad is in decline due to such factors as habitat destruction and the Chytrid fungal disease that has devastated amphibian populations worldwide. It grows to about 4 inches in length. They are known to burrow into soil and can be active year round in lower elevations. Several distinct pockets of the amphibian can be found in the western United States and as far north as southern Alaska.

Loading...
Newer Post
In Search Of The Giant Ethiopian Leopard Tortoise: Would The Tales Of A Race Of Larger-Than-Normal Leopard Tortoises Be True?
Older Post
Golden Poison Frog Gets A Sanctuary In Colombia
Advertisement