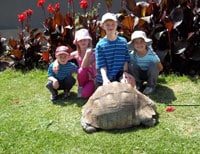 When my brother Jerry and I were doing research for our book, Leopard Tortoises: The Natural History, Captive Care and Breeding of Stigmochelys pardalis, we uncovered accounts of giant leopard tortoises inhabiting Ethiopia and Somalia, and found photos of leopard tortoises larger than I'd ever seen. A Google search suggested that the Ethiopian tortoises may grow to one meter (this could be the measurement over the shell). I talked to collectors in other countries, who assured me that they had tortoises from Ethiopia that were well over 24 inches, and one dealer offers Ethiopian leopard tortoises for sale that are 27 1/2 inches. 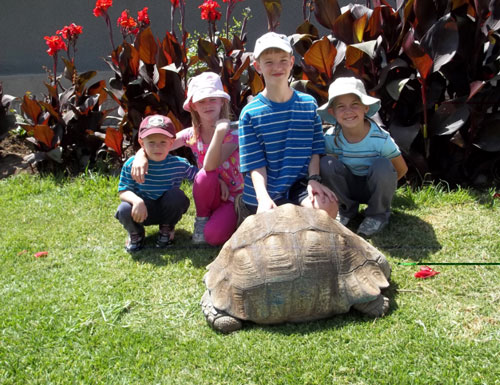 The author's grandchildren with a large leopard tortoise in Ethiopia.

Ethiopia is a very poor country, with an ancient Christian and Muslim background. It is slightly less than twice the size of Texas, and there are more than 80 million residents, giving it one of the world's most dense populations. The people speak Amharic, tribal languages and a little English. The capital city, Addis Ababa, is located in the country's center at an elevation of about 7,500 feet, making it the third highest capital in the world. Native tribes live much as they have lived for hundreds of years and continue to war among themselves. Most of the wildlife, including reptiles, is gone, and wildlife reserves have had a difficult job protecting what is left.

Due to political uprising throughout Africa, as well as undependable transportation and warring among the local tribes, it seemed highly unlikely that Jerry and I would ever be traveling to Ethiopia in search of giant leopard tortoises. However, in 2010, my daughter Nadine announced that she, her four children – Sawyer, Allison, Tori and Seth — and husband Warren were moving to Ethiopia (Warren is employed by USAID). That opened the door to Ethiopia, and my wife Lark and I, along with Jerry, began planning our visit.

We arrived at the Bole International Airport in Addis Ababa on the morning of March 25, 2011, and immediately headed to the International Community School of Addis Ababa, where my grandchildren attend. Nadine reported that there were several large leopard tortoises in the schoolyard that were much larger than any I had at home. The first tortoise we found was a male that measured a whopping 26 inches, making it the largest leopard tortoise I had ever seen. There were two pairs of leopard tortoises on the grounds, with the males measuring about 26 inches and females about 20 inches. At this point, our trip was already a success!

The next day, we traveled to Awash National Park. Nadine drove, and all the grandkids came along as it was their Spring Break. I was amazed at how well she did driving a Toyota Sequoia in a land where traffic laws seemed irrelevant. The roads were crowded with small buses, called "blue donkeys," which were packed with passengers. We also shared the road with trucks, real donkeys, donkey carts, goats, sheep, horses, cows, camels and masses of people. Driving was a free-for-all! Any lane, speed limit or direction seemed to be just fine. Despite this, we arrived safely in Awash after about four hours and soon saw baboons, monkeys, crocodiles and an array of hoof stock and birds.

At the Awash Falls Lodge we found a large leopard tortoise shell measuring 26 inches. Now empty, it had belonged to a male, determined by the wide separation of the anal scutes and some concavity in the plastron. Lodge staff said there were more tortoise shells at a small museum nearby. The "museum," and I use the term loosely, housed several dusty animal pelts, mounted animal heads, a snake rib cage, photos, and three leopard tortoise shells. Two were from males and measured about 26 inches in length (the third was a small, 8-inch tortoise). There was no question now – there was indeed a race of large leopard tortoises in Ethiopia!

Our park guide told us that one of the museum's leopard tortoise shells had been collected on a mountain northwest of Lake Basaka. He made arrangements for us to visit the hyena caves near the lake, which were at the base of the mountain.

Travel off the main roads in Ethiopia can be dangerous. Local tribes are at war, and passage across tribal land requires a tribe's permission. Armed military security is required in much of Awash National Park, and as we hiked to the hyena caves, we were joined by some local tribesmen who were paid to allow us to cross their land. We crossed a deep crevice reported to be home to rock pythons, but we didn't see any.

What an eerie experience those caves were! We sat silently, some distance away from them, and as the sun went down, we watched as one by one, hyenas emerged from the caves and disappeared into the darkness to hunt. We didn't find any leopard tortoises here, but we were able to document the mountain where large leopard tortoises had been found in the past.

We were told that leopard tortoises had occasionally been spotted around campsites near Awash Falls, but a morning hunt failed to reveal any. Then, later, as we were leaving the park on our way back to Addis Ababa, Jerry was the first to spot a live leopard tortoise, about 100 feet off the road. It was a 20-inch male. We searched for others and found a pair of large tortoises beneath a thorn bush. My hands and arms were bloody by the time I extracted them, but it was worth it: the female was 24 inches and the male was a monster at 28 inches!

Our next destination the following day was Arba Minch, a town near Nechisar (meaning "white grass") National Park and Lake Chamo, located about 250 miles south of Addis Ababa. This time the Sequoia was driven by Warren, and accompanying us was a Toyota Land Cruiser driven by a hired guide. It took about 10 hours to traverse the 250 miles to our destination. En route, we stopped at a restaurant in the town of Sodo for lunch. We ordered half a roast chicken, and it provided about as much meat as one hot wing would in the United States. Plus it was as tough as shoe leather. But in the restaurant was another leopard tortoise shell, this one measuring 20 inches.

At Arba Minch, we checked into the Swayne's Hotel, which overlooks Nechisar National Park. We took a boat on Lake Chamo to see huge Nile crocodiles and hippopotamuses at the "crocodile market," which is not really a market, but a place locals take visitors who want to see crocodiles. In the park, we saw monkeys, baboons, beautiful birds and red-headed agamas.

Unfortunately, due to unsafe road conditions and unrest among the native tribes, we were unable to travel in most of the park, and we didn't see any leopard tortoises. So we turned north again, and after a night spent at Dorze, a native village in the highlands, we journeyed to Lake Langano and the Bishangari Lodge. That night, Nadine found a dark-colored snake in her cabin, but due to poor lighting we were unable to identify it. One of the lodge guides said it was a young cobra, another suggested it was a black mamba, and still another said it was a common, non-venomous snake. We also found some beautiful blue agamas, as well as ever-present baboons.

We spent the morning hunting for leopard tortoises without success, but were told that the Sabana Lodge, further north, had several large tortoises. Our guide took us there and convinced the guards at the gate that we should be allowed into the complex to "check out the rooms." After a few minutes, we located the tortoise pen. It housed three large leopard tortoises, ranging in size from 20 to about 27 inches.

Back in Addis Ababa, Nadine told us there were two more places where there were leopard tortoises. One was the Royal Palace of Emperor Haile Selassie, which was not open to the public, and the other was the Lion Zoo. So we headed to the zoo. There was a section containing antique lion cages, and in the space between the guard rail and the lion cages were leopard tortoises. These were the darkest leopard tortoises we saw on our trip. They appeared as though they were covered with a black mold or moss, but we were unable to get near enough to make a close examination. There were three large tortoises that we estimated to be 20 to 26 inches in length.

All in all, we found a total of 18 leopard tortoises during the trip, with their average size being longer than 24 inches. In this race, it appears that the males grow much larger than the females, opposite to most of the leopard tortoises in the U.S. Most of the tortoises we saw in Ethiopia, even those as large as 20 inches, had nicely marked shells, suggesting that they were still young at that size.

I am unaware of any of the giant Ethiopian leopard tortoises ever making it to the United States. The U.S. Department of Agriculture will no longer allow the importation of leopard tortoises into the U.S., due to concern that an African tick, a carrier of heartwater disease, could accompany them and infect U.S. cattle. Nonetheless, our trip to Ethiopia was a wonderful adventure and a great success. It was wonderful to see the impressive giant leopard tortoises in person!

Richard Fife has bred reptiles for more than 40 years and leopard tortoises for more than 32 years. He is the owner and operator of Riparian Farms, a turtle and tortoise breeding facility in Arizona. Visit him at Ivory tortoise.