Graduate and undergraduate students from Clemson University teamed up with Michelle Martin from the University of South Carolina to provide a public outreach demonstration for Girl Scouts and their parents (totaling 100 people) at Camp WaBak in Marietta, SC, on May 5, 2012. The demonstration involved pet leopard geckos, snakes, and museum specimens that were loaned out from the Campbell Natural History Museum at Clemson University. 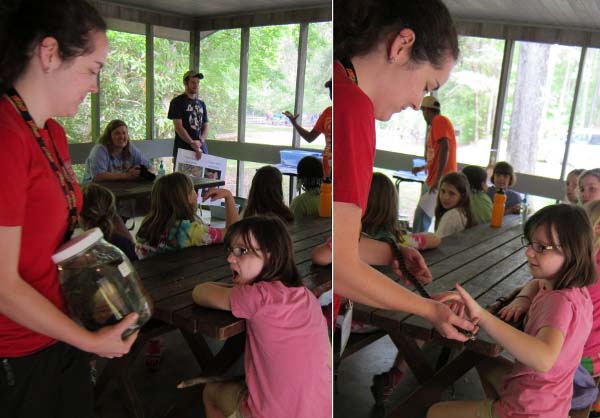 All photos by Sandy Kawano

Through a combination of hands-on interaction with live animals, museum specimens and visual media, both the Girl Scouts and parents learned the difference between amphibians and reptiles, wild versus pet animals, and played a fun game to bust myths about herps.

"The main goal of the demonstration was to familiarize the younger generation with herps, educate them about their biology, and to instill a sense of appreciation for herps," said Sandy Kawano, Ph.D Candidate in Biological Sciences at Clemson University and coordinator for the demonstration. 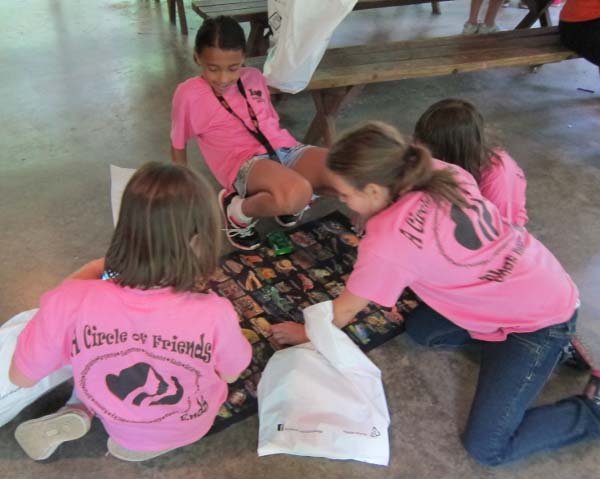 Some girl scouts were awarded Zoo Med posters if they answered herp trivia questions correctly. These girls were excited to see the diversity of herps on this poster, and quickly started picking out their favorites.

"If kids develop more of an appreciation for the predators, for the slimy-and-scaly-skinned ones, and for the misunderstood ones, they are then poised to appreciate all wildlife more," said Michelle Martin, head coordinator for the Camp WaBak weekend activities that included the herps demonstration.

Thilina Surasinghe, Ph.D candidate in Wildlife and Fisheries Biology at Clemson University, described the Myth Busters game as his favorite part of the demonstration because ". . . this is the occasion when we filtered fact from fiction. Misconceptions about nature and wildlife lead to unnecessary conflicts between wildlife and humans. Once such fallacies are eliminated through proper, hands-on education, resolution of such conflicts becomes easier for conservation efforts." 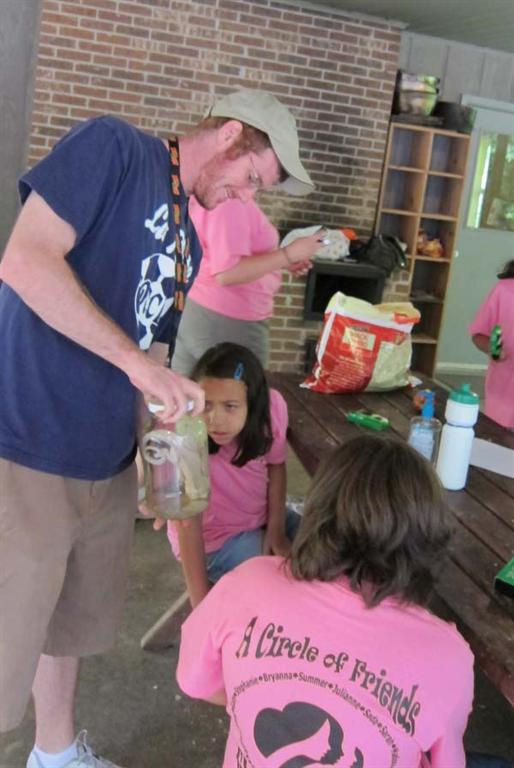 Austin Wray (Biological Sciences PhD Candidate) shows the girls a preserved panther chameleon to emphasize how diverse herps can be.

Conservation biology was also touched upon when the Girl Scouts learned the difference between wild versus pet animals, and how we should try to maintain wild populations so that friends and future generations can appreciate them in the wild as well. The Clemson students focused on providing a fun, learning experience to encourage the kids to view science education with a positive attitude. A main theme of the demonstration was to encourage the Girl Scouts to have so much fun that they didn't even realize that they were learning. In addition to using science to dispel popular myths about herps, the Myth Busters game also functioned to foster their critical thinking skills by actively involving them in the demonstration.

Additionally, the Girl Scouts were introduced to the basic principles of ecology and functional morphology through some of these myths. For instance, the Draco lizard (Draco spp.) and the flying gecko (Ptychozoon kuhli) were used to illustrate that some herps can glide and do so by increasing the surface area of their bodies to fall down slowly from trees. A preserved flying gecko was passed around to enable them to see the extra flaps of skin on the body. Then pictures of a Draco lizard and its skeleton were shown so that the girls could see that Draco lizards achieve a Frisbee- shaped body with greater body surface area by stretching out elongated ribs that are covered with skin. 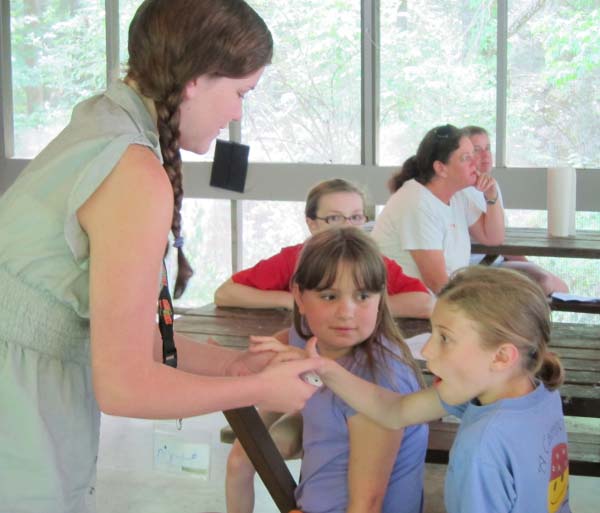 Victoria Robertson (undergraduate in Wildlife and Fisheries Biology) provides the girls with an up-close-and-personal encounter with a live leopard gecko. For some girls, this might have been their first interaction with a gecko or even a herp in general!

This public outreach event was also a fun and enriching experience for the Clemson students. Katherine Gleason, a master's student in biological sciences, said that her favorite part of the event was "seeing the girls get really excited about herps and the different specimens we had to show them." Science education and public outreach can be some of the most enjoyable aspects of being a scientist, and Gleason described it as important for keeping the general public involved with science.

"Instead of people thinking that scientists are abstract, faceless strangers working in labs, they can see that we're just regular people trying to figure out how and why the world works the way it does," she said.

Martin said that "children are naturally curious about what they see outside, and educating them about what they are seeing helps them to become better stewards of nature. . .  It also makes them better observers: as they know more, they notice more, and that leads to all sorts of wonderful discoveries." Thus, such events can illustrate how science can be a pathway to solving nature's mysteries. Kawano said it was events such as this that inspired her to pursue a career in biology and that public outreach events are a chance to "pass on the torch" to the next generation of scientists.

Herpetology was chosen as one of the demonstrations because herps are often under-appreciated yet play important roles in ecosystems and society and are a fascinating group of animals. Surasinghe said that he studies herps because they show a diversity of lifestyles, live in a variety of habitats, and because their "cold-blooded" physiology requires them to rely on the external environment to regulate their body temperature, they are sensitive to disturbances in the environment. Because of these features, herps serve as the "canaries of the coal mine" and can act as indicators of environmental health.  Said Martin: "Because it may be some obscure chemical emitted by the skin of a toad that saves us all from cancer one day, developing an attitude of preservation and conservation could be essential to our own survival as a species."

To continue to foster their appreciation and interest in herps, the Girl Scouts were all provided with fun activities and gifts from various donors. Zoo Med generously provided lanyards, stickers and information packets for everyone, and posters that were awarded to kids who answered trivia questions about herps based on what they learned from the demonstration. An activity book was created using material kindly obtained from ReptileChannel.com and the Alligator Farm Zoological Park in St. Augustine, FL. Support was also received from Dr. Alfred Wheeler (Chair for the Department of Biological Sciences at Clemson University), and Stanlee Miller (curator for the Vertebrate Collections at the Clemson University Campbell Natural History Museum).