Red-eared sliders purchased from street vendors likely cause of outbreak. 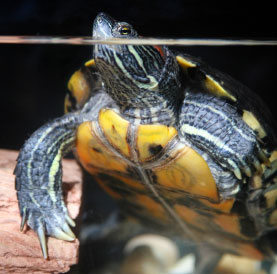 Red eared sliders with shell lengths of less than 4 inches are the likely culprit for the Salmonella outbreak that has affected 124 people in 27 states.

Those considering the purchase of a red-eared slider should do so from a reputable pet store or turtle breeder and not from street or swap meet vendors or other vendors that don't follow the law. Turtles with shell lengths of less than 4 inches should not be purchased as pets or given as gifts, according to the CDC.