Researchers at the Sahlgrenska Academy at the University of Gothenburg in Sweden conducted a study of rats and the drug Exenatide that showed the drug reduced the cravings for food in rats.  Exenatide, which is used by people with type 2 diabetes to control their blood sugar, is the synthetic version of exendin-4, a naturally occurring substance that comes from the saliva of the Gila monster (Heloderma suspectum), a large venomous lizard that is native to the Southwest United States and parts of Mexico. 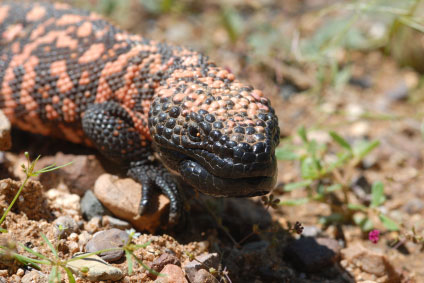 A drug derived from the saliva of the Gila monster has been shown to reduce food cravings in rats.

According to a report on RedOrbit, University of Gothenburg Assistant Professor Karolina Skibicka, a co-author of the study, says that the finding that rats lose their cravings for food when taking the drug is surprising. She says the study shows that exendin-4 affects what is called the reward and motivation regions of the brain. The drug could help obese people take control of their weight as the drug suppresses the desire to eat, and may also help reduce the craving for alcohol, Skibicka said.

The Gila monster is North America's largest lizard species. From the family Helodermatidae, the lizard grows 13-19 inches and can reach 24 inches in length, including the tail. They eat birds, eggs, smaller reptiles, and rodents in the wild. They can be found in desert and foothills in Arizona, Nevada, New Mexico, Utah, and Mexico.