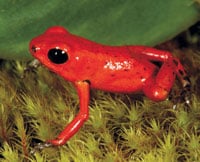 Oophaga [Dendrobates] pumilio is one of the most difficult anurans to propagate in captivity. Larvae are obligate egg-feeders, so they are completely reliant on their parents. Clutches range from three to 10 eggs, and they are typically laid on bromeliad leaves or on the sides of a film canister. Males initially assume responsibility for keeping the eggs hydrated. They expel water through their vents. Upon the eggs hatching, females transport the larvae as needed to make sure their water source does not become spoiled. 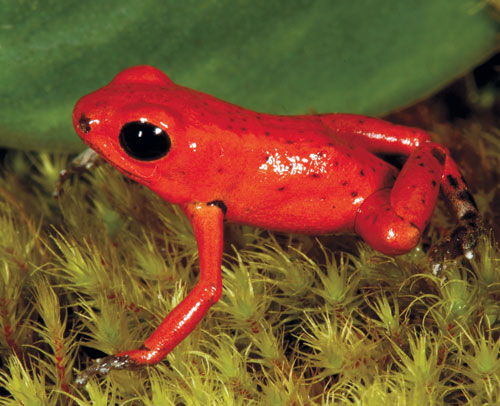 Photo by Gerold and Cindy Merker.

Strawberry poison frogs (Oophaga pumilio) are highly prized by herpkeepers, but they are difficult to rear in captivity.

Spoilage is minimized with the use of an automated misting system, which helps to flush bromeliad axils, which often are the frogs’ spawning sites, and maintain a sufficient water level. As a starting point, the system should run in the late afternoon or early evening for approximately five minutes. The frequency and duration can be further modified based on the water level in the bromeliad axils. Some frogkeepers also flush the axil a few times weekly to maintain water quality.

Along with this added requirement for misting, it also becomes important to provide appropriate ventilation. Approximately one-fourth to one-third of the terrarium lid should be screen to prevent stagnation of the environment. Automated misting and adequate ventilation should minimize the frogkeeper’s need to interrupt during the development of eggs and larvae.

The most difficult task lies in the care of the froglets just after metamorphosis. It is generally considered best to leave the frogs in the original terrarium because it minimizes potential stress. However, a couple inches of leaf litter is important in these cases, so froglets can retreat from the adults.

Some frogkeepers also have had success with separating the small froglets into alternative rearing containers. Large plastic deli containers make suitable enclosures for juvenile frogs. Substrate should consist of leaf litter in various stages of decomposition.

Feeding froglets can be a challenge. It is important to have numerous producing springtail colonies before the frogs undergo metamorphosis. There should be at least two colonies per frog at all times. One feeds the frogs, and one repopulates and makes more colonies. Leaf litter helps to sustain springtails once they are placed in the terrarium.

Some hobbyists have noted problems with the coloration of juvenile frogs raised in captivity. Because of this, it is recommended that springtails and fruit flies be supplemented with carotenoid-containing vegetables, such as sweet potatoes, carrots and tomatoes. These can be dried and powdered, creating a dust that can be used in a similar fashion to the vitamin and mineral supplements currently on the market.