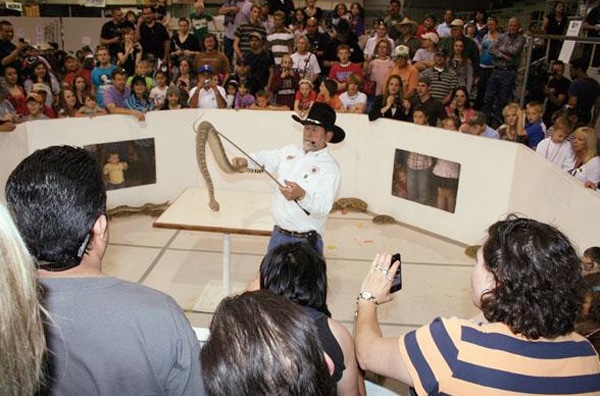 Texas To Consider Banning Gasoline Use To Collect Rattlesnakes

Texas is one of the holdout states that still allows gasoline use to collect rattlesnakes.

Rattlesnakes in Texas may get a reprieve if the Texas Parks & Wildlife Department goes ahead and approves a proposal to ban the use of gasoline while capturing rattlesnakes. Rattlesnake hunters in Texas spray gas into the dens of rattlesnakes, which are forced out by the fumes. The problem with this is that other animals within the dens are often killed in the process. The use of gas usually occurs right before rattlesnake roundups in the state, of which the Sweetwater roundup is the largest, and one of the few left in the country in which rattlesnakes are displayed and then killed for their meat, skins, and rattles.

"It's very important for us because it's the method we use primarily to catch volumes of snakes," Dennis Cumbie, a lifetime Jaycee member and chairman of the milking pit at the Roundup told NPR. "Sweetwater's got the world's largest rattlesnake roundup. We average 4-5,000 pounds of snakes per year. Without the gassing we wouldn't have those numbers."

That is a lot of snakes taken out of their ecosystems, snakes that help to control rodent populations. Right now, 29 states do not allow the gassing of snake dens. Texas is not one of them, and it holds the most popular and largest rattlesnake “roundup” in the country every year.

The gassing of rattlesnake dens though, may soon end though as the Snake Harvest Working Group, a group appointed by the state’s Parks& Wildlife department to look at gassing an other aspects of capturing rattlesnakes, considers banning the practice of gassing western diamondback rattlesnakes May 25.