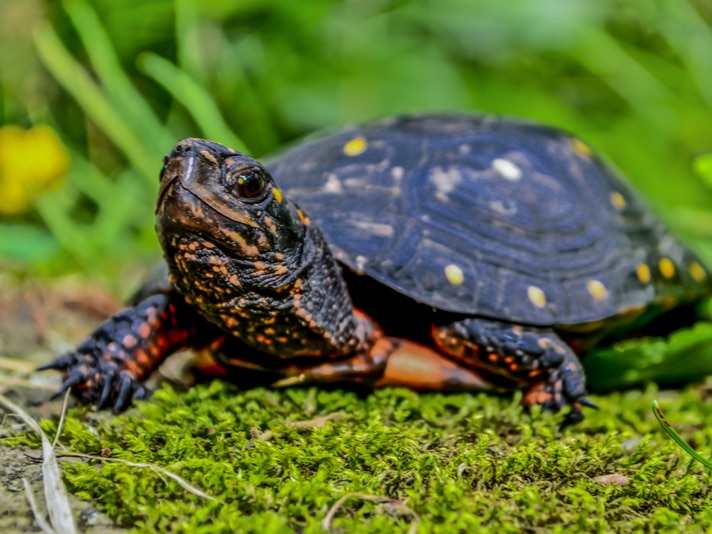 Spotted Turtle At Risk Of Disappearing In Rhode Island

A three year study turned up just 50 spotted turtles out of 2,000 turtles caught.

The spotted turtle (Clemmys guttata), a candidate for the U.S. endangered species list, is at risk in the state of Rhode Island, according to a University of Rhode Island study that took three years to complete.

University of Rhode Island graduate Scott Buchanan, Ph.D in collaboration with URI Associate Professor Nancy Karraker sampled 88 wetlands in the state over the course of three years, examining close to 2,000 turtles in the process. Their study, in which they repeatedly visited the different wetlands, yielded just 50 spotted turtles, according to a press release put out by the university.

“Throughout their range, populations of spotted turtles have declined extensively, and we can certainly say with a good deal of confidence that’s also the case in Rhode Island,” said Buchanan. “I found that they are associated with wetlands in forested landscapes, which means they are susceptible to development, forest fragmentation, wetland alteration and other human disturbances.”

Buchanan noted that spotted turtles were found in places where human disturbances were minimal and said that those areas where they were found need to be managed to ensure the viability of the species in the state. The alteration of the turtles’ habitat as well as illegal collection for the pet trade were also issues of concern.

“Spotted turtles will command a formidable sum in the pet trade, which is unfortunate,” Buchanan said. “It’s really easy for someone to deplete an entire population of them very quickly.”

Buchanan said he encountered people during the three year study who had captured spotted turtles with the intention of keeping them as pets, but decided to release them after Buchanan implored them to do so.

Buchanan also found more non native red-eared sliders in the wetlands he surveyed than spotted turtles,  noting that wetlands close to roads are the most likely areas to find the non-native turtle.

“They’re an especially detrimental invasive species,” he said. “It’s a good bet that all the sliders we found are turtles that were bought at pet stores. We don’t know if they’re reproducing in the wild.”

Other species, such as eastern painted turtles and common snapping turtles were found in healthy numbers during the surveys.

Buchanan is expected to share the data from the surveys with biologists who are collecting information for three turtle species, the spotted, wood (Clemmys insculpta) and Blanding’s turtle (Emydoidea blandingii), that are being considered for listing on the U.S. endangered species list.

Getting animals on the list often takes years, so in the meantime Buchanan has some advice on how to protect the spotted turtle in Rhode Island.

“It would mean protecting and preserving wetlands, especially forested wetlands, including small wetlands like vernal pools where they sometimes overwinter,” Buchanan said. “It would also mean minimizing fragmentation of the landscape surrounding those wetlands. And it’s also really important that we protect the turtles themselves from illegal collection. That’s an increasing concern among conservation biologists.”

Loading...
Newer Post
Mom Offers $500 For Safe Return Of Little Girl’s Stolen Pet Lizard
Older Post
Mixed Species Vivaria: Can It Be Done? And If So, How?
Advertisement