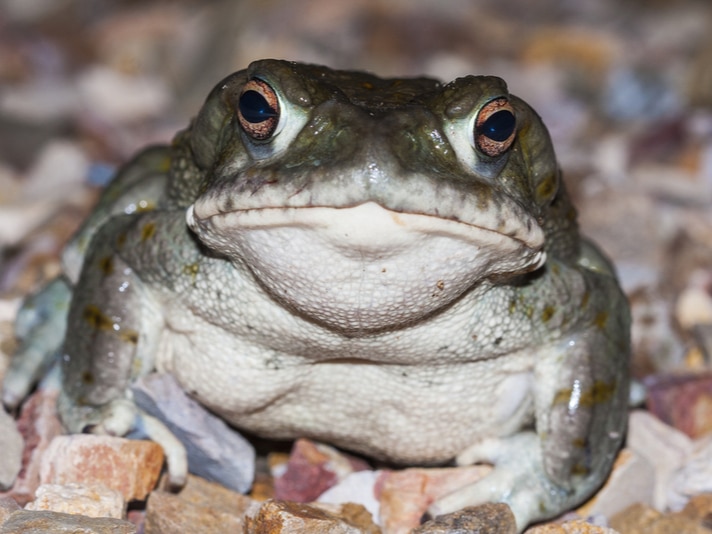 Do not lick these toads, and make sure your dogs keep them out of their mouths.

Do not lick these toads, and make sure your dogs keep them out of their mouths.

Sonoran desert toads have toxins on their skins that can cause humans to hallucinate if ingested or licked.

The National Park Service released a bulletin on social media asking park visitors to refrain from licking the skin of the Sonoran desert toad, (Bufo alvarius), also known as the Colorado River toad. Sonoran desert toads have toxins on their skins that can cause humans to hallucinate if ingested or licked.

The large toad, which grows to close to 7 inches in length, is one of the largest in North America. It also features massive parotid glands that secrete a toxin so potent that it could make you severely ill.

“As we say with most things you come across in a national park, whether it be a banana slug, unfamiliar mushroom, or a large toad with glowing eyes in the dead of night, please refrain from licking. Thank you. Toot!,” the park service wrote on Facebook.

While the National Park Service is serious in its warnings, those on Facebook had decidedly different degrees of concern.

Said Katie O’Malley on Facebook: “Don’t lick the toads? There goes my weekend plans” to which Richard Flint replied: “I think, but not sure but there is a toad in Florida? that people lick and get high from. The question I have, what kind of drug addict said, “hey we’re out of drugs so I’m going to lick a toad”?

Natural History And Captive Care Of The Colorado River Toad

Said Dierdre Curran: “Not only do I always learn something from your posts, but they also usually have me spitting out whatever I’m drinking at the moment. Thank you, National Park Service. I will not lick the toads.”

Laughs aside, do not lick these toads, and make sure your dogs keep them out of their mouths.

Sonoran desert toads is North America’s largest native species of toad. It can grow from 3 to 7 inches in length and is an olive green or brown in coloration with freckled orange or brownish spots on its dorsum. Its range extends from southeast California to extreme southwest New Mexico and into Mexico.