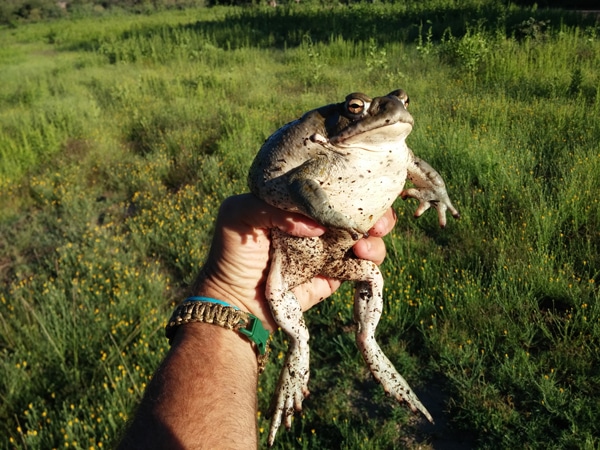 Natural History And Captive Care Of The Colorado River Toad

Ranging from extreme southeast California to extreme southwest New Mexico and south into Mexico (Behler and King 1979) and at a staggering 3 – 7 inches (7.7 – 17.9 cm), the Colorado River toad, Bufo alverius (some may argue the not formally accepted sub-genus Incilius) is North America’s largest native species of toad. Relatively smooth skinned, almost frog like and with few randomly placed, raised bump-like glands, Bufo alvarius does not fit the general appearance of the other typical Bufo genera toads. This toad is usually shades of olive green, sometimes brown and frequently freckled with small orange or brownish spots on the dorsum. 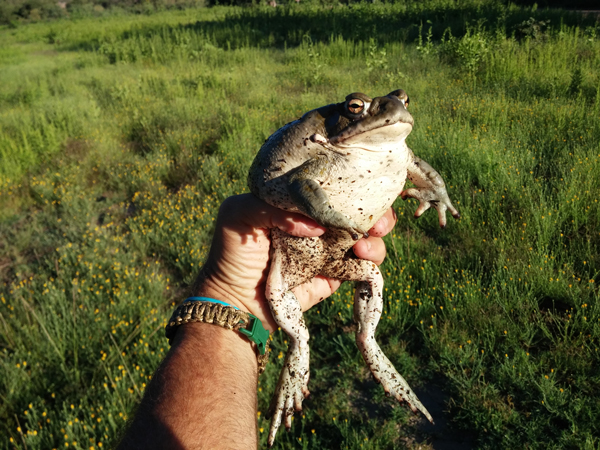 There are large elongate paratoid glands which lie beside and come into contact with the obvious cranial crests. This toad species has a white bump that marks the corner of each side of its mouth. Its belly color is soft white. It is not so much a vocal species of toad, its call is rather subdued and sounds much like a short hoot, lasting about a second. In captivity, this species shuffles around frequently and these sounds of activity are often mistaken for snuffling vocalizations.

A nocturnal desert species, The Colorado River toad or Sonora Desert toad as it is sometimes referred, prefers habitat around permanent sources of water, whether it be mitigated waterways or natural. These toads may also occupy space in arid or semi-arid grasslands and woodland habitat. During the heat of the day, Bufo alvarius spends its days hidden, buried deep within the desert sand usually against a shaded hillside or beneath rocks or shrubs. They sometimes muscle out the heat of the day within crevices, deeply hidden beneath the rocks. Often they retreat to rodent or desert tortoise burrows and mine shafts, or wherever locations damp and cool may prevail over the scorching sunlight.

As the heat of the day recedes, hunger forces these creatures from beneath the earth in an effort to feed. These toads have a voracious appetite and grow rapidly! They will try to overpower organisms considerably larger than themselves including their own species. They will eat venomous invertebrates as well as small venomous snakes. A primary food source seems to be various species of hard-shelled beetles including darkling beetles of the family Tenebrionidae. In my experience with all wild caught individuals of this species, defecation always produces and sometimes exclusively, shells of the death feigning beetles, including the powder blue Cryptoglossa verrucosus and shells from various species of darkling beetles (Embaphion ssp.), with or without ridged elytra. It has been suggested that the acrid liquid dispelled by species of darkling beetles may actually contribute to the Colorado River toads own toxicity.

Breeding season for the Colorado River toad is generally May through July but in many areas it is highly dependent on the onset of the rainy season or monsoons. Like most species of Bufo toads, Bufo alvarius males approach receptive females while in the water and often while still on land! Many individuals are actually killed while crossing highways to reach breeding pools. The smaller male climbs upon her back, firmly embracing her beneath the arm pits in a breeding hold known as amplexus. Female Bufo alvarius deposit several thousand eggs in long gelatinous strands, while the male fertilizes them externally. Days later, the eggs hatch into pollywogs and rapidly develop into miniature versions of the adults. Developed toadlets are often found in large numbers with red spotted toads (Bufo punctatus) and a few species of spadefoots (Scaphiopus ssp.) Sexual maturity may be reached under favorable conditions within one season.

The Colorado River toad is very well protected with a powerful skin secretion that may prove fatal to would be predators. Toxic skin secretions of Bufo alvarius contain 5-MeO-DMT (5-methoxy-dimethyltrypta mine) which is a powerful psychedelic tryptamine. These skin secretions also contain Bufotenin, a tryptamine that is related to the neurotransmitter serotonin and is similar in chemical structure to the hallucinogenic psilocin, a psychedelic mushroom alkaloid. Although these toxins are an effective means of self-defense, they have found another use in the world of humans. People have been known to exploit these toxins which when used carefully can produce a euphoria and a hallucinogenic effect that may last as long as 10 to 15 minutes during the peak of intoxication. Some individuals liken it to an out of body experience.

People have also been known to ingest the dried skins of Colorado River toads to attain the same effects. Dried Bufotoxins have been used as an Entheogen in some South American cultures in an effort to gain religious enlightenment. This effort has been adopted in at least one religious cult/church in the American southwest as well. Keep in mind, Bufo toxins also contain cardiac glycosides. Ingestion of Bufo toad poison and eggs has resulted in several reported cases of poisoning and some of which have resulted in death. Although it is not unlawful in America to possess this species of toad it is unlawful in some areas to possess the dried toxin and there has been at least one arrest over such possession. Bufotenine is regulated as a Schedule 1 drug by the US Drug Enforcement Agency.

As toads go, Colorado River toads are relatively easy to care for, much in the same way as you would care for smaller species of bufo only on a larger scale. Whereas a twenty gallon long tank my suffice for several Fowler's toads Bufo w. fowleri, Bufo alvarius grows considerably larger much quicker and are notably more active, thus requiring a greater amount of space. A 50 to 75 gallon glass terrarium should be fine for two pairs of adults. 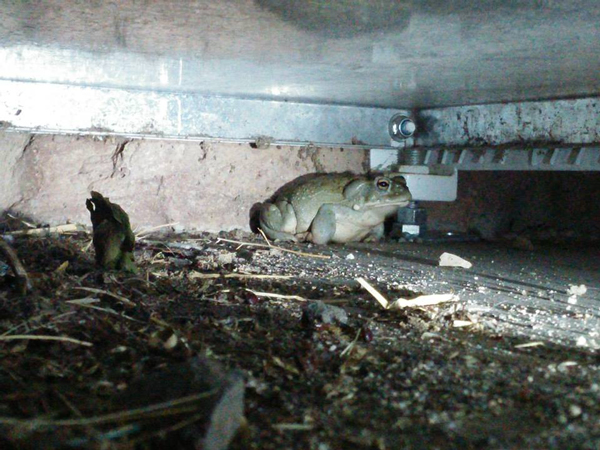 A large Colorado River Toad awaits her next meal beneath a refrigerator unit outside an Arizona store.

Inadequate space will often result in damaged toads. When space is not adequate, toads will often bump their faces against the glass in an effort to move about and avoid one another. Much damage can be done by this activity. Like other species of toads that I have kept in captivity, I use ground pine bark mulch. This mildly acidic mulch prevents the growth of harmful bacteria and retards the growth of fungus. I place several inches of mulch down as a substrate, saturating it with fresh water. Urination typically occurs first, then the toads absorb moisture through the soft tissue of their bellies and when the water is pooled, through cloacal absorption. The bark mulch is allowed to dry out naturally and when the surface has become completely dry (the lower mulch should still be damp) the toads are removed to soak in fresh water and are looked over for signs of distress. Soiled bark mulch can be recycled to the garden, but should not be placed back in the tank as it is now saturated with ammonia and dry fecal material.

Although Bufo alvarius is a desert species, it is imperative that these animals are not allowed extreme temperatures or able to reach dehydration. Highs of 75-80 degrees Fahrenheit work best for this species. You may use a full spectrum lamp as this may be psychologically beneficial to this species. It is extremely important to provide a hide box for this species as well. They will use it and often due to the weight of these toads, the substrate becomes packed down and it makes for difficulty in burrowing, thus the hide box is essential. These toads will eat live or pre-killed rat pups, small mice or hoppers. Pre- killed hoppers should be offered by means of forceps and moved slightly in front of the hide box opening. The toads will eat them from out of the darkness and security of the hide box. Live insects such as crickets and beetles should be offered as a primary food source. Be sure to remove uneaten crickets daily as they may turn the aggressor.

Captive breeding is achieved much like that of other North American species of Bufo. A gradual cooling down period in the late fall such as the end of October will bring these animals into a winter rest. Temperatures of 50 degrees Fahrenheit will suffice and a hibernation of four months is recommended. Temperatures should be gradually brought back up in early March and food offered once again. After a couple of months animals may be stimulated to breed by heavily misting their enclosure several times a day for a duration of two to three weeks.

After this time, your toads should be moved into a rain chamber. This chamber can be made rather simply using two medium sized plastic totes, two small recirculating pumps and two small submersible filters. Each of the totes are filled with four or five inches of fresh water. Each tote will contain a recirculating pump. Remember, if you use a stronger pump, be sure to protect your toads and their egg's from the pump impeller's vacuum! Create a small cage around the pump. This should also be applied for a stronger filter as well.

The tote which will house the captive toads should have a fine mesh screened cover over it. The water from the other tote will cascade across this mesh cover mimicking the sound and activity of rain, however crudely it may be. Once the rain chamber is initiated, it should be allowed to run continuously. Pay close attention that the water is not being lost somewhere in the design of the chamber. Five or six inches of water will be sufficient for your toads to be successful in breeding. Be sure to include a smooth stone or other object that will enable toads to hold onto if they begin to tire.

Within a few days you should hear your toads call and amplexus will begin. Eggs will follow within the following days as will the Pollywogs, days from there. Upon arrival of the eggs, adult toads should be removed and soiled water replaced with fresh water Pollywogs can be kept successfully on algae and flaked fish food. It is important to remove any uneaten food in a timely fashion. Be sure developing toads are kept clean with daily water changes.

The Colorado River toad is a rewarding species to work with. Individuals are very aware and seem almost to recognize their keepers. They are eating machines and individuals should be monitored closely as they tend to become very fat, very quickly. Reducing the amount of food per feeding will help. Be sure to know your local laws regarding this species. You may be able to avoid some serious persecution by the law with just a simple phone call. Do the right thing and be responsible.

Leo Spinner owns and operates “The Spotted Turtle Herpetological Institute” & “Skin & Scales Exotic Animal Presentations.” He has over 45 years of captive care, research and breeding of Amphibians Reptiles and Invertebrates. Leo Spinner is a native of Cape Cod and resides in Massachusetts with his family.