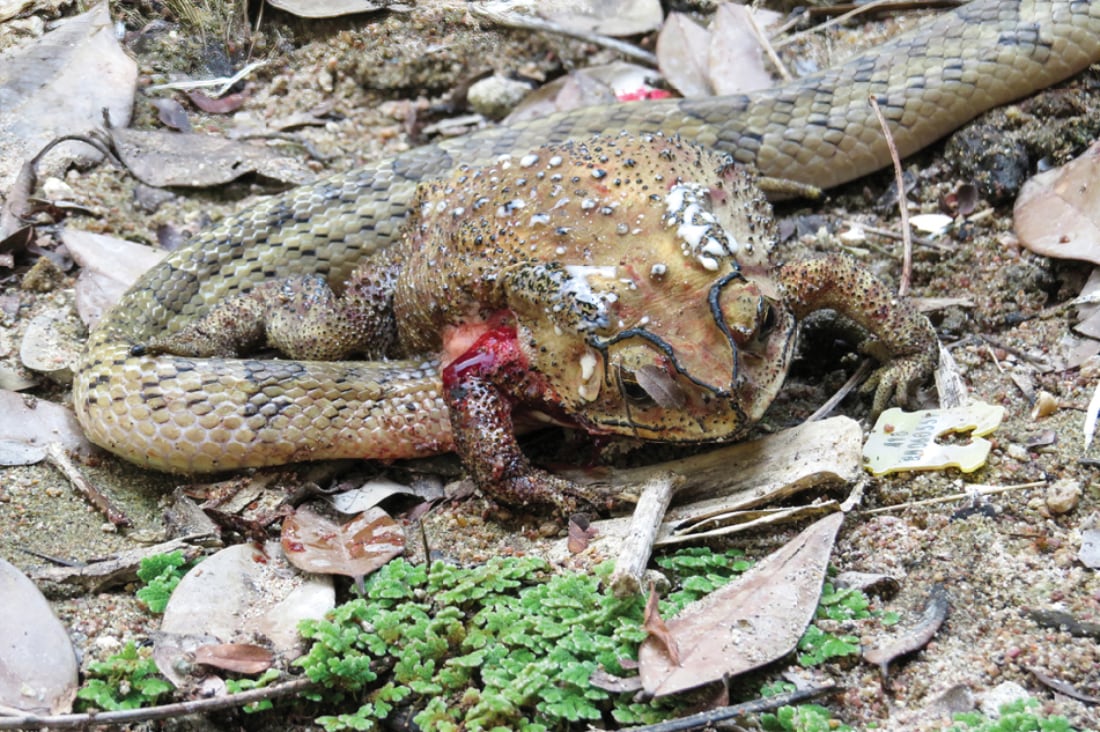 [gtx_gallery] Researchers in Thailand have made an interesting discovery with the kukri snake, (Oligodon fasciolatus), a colubrid snake found in Th

Researchers in Thailand have made an interesting discovery with the kukri snake, (Oligodon fasciolatus), a colubrid snake found in Thailand and several other countries in Southeast Asia. The snake, so named after the kukri knife, has an egg tooth that it uses to slash the bellies of Asian black-spotted toads (Duttaphrynus melanostic), and then proceeds to stick its head into the amphibian and eat its organs while the animal is still alive.

The researchers, Maneerat Suthanthangjai, Winai Suthanthangjai, Kanjana Nimnuam of Thailand and Henrik Bringsøe of Denmark, documented three cases of the reptile using its posterior maxillary teeth to slash open the abdomen of a live poisonous toad and eat the toad’s organs. This occurs after a fight between the reptile and amphibian and included the secreting of poison from the toad’s dorsum and neck.

In one observation, the researchers watched as the snake and toad fought near the bank of a pond. That fight lasted nearly three hours. In this incident, the snake was able to make an incision into the toad’s abdomen and stick its head in. It started to eat the organs, but when the snake pulled its head out, possibly to breathe, the toad sprayed its poison on the snake, hitting it in the head.

The toad also secreted some fluid from the back which dripped down and covered the snake’s eyes and head. The snake retreated. It rubbed its head on the forest floor and then, after 10 minutes of hiding under a log, it searched again for the toad. It found the toad again and grabbed it by the leg only to be sprayed again with the poison. The snake then retreated for some time, and later commenced its attack on the toad, pulling out a lung, some muscular tissue and some fat tissue. Both were then attacked by ants. The snake retreated and researcher Winai Suthanthangjai sprayed the ants with water. At this point the toad was already dead. The total duration of the attack and feeding was about 45 minutes.

The discovery is interesting to note because most snake species eat their prey whole, with few exceptions. The researchers made these observations in August 2016, April 2020 and June 2020, and documented the interaction with extensive photographs. They also observed a kukri snake swallowing a large juvenile Asian black-spotted toad whole.

There are other snakes that are known to eat their prey without swallowing the entire prey. There are several snail eating snakes that do not eat the shell of snail and there is a Southeast Asian water snake species that crush freshly molted crabs before eating them.

There are nearly 100 species of kukri snake of the Oligodon genus. These small colubrid snakes are generally rear fanged and mildly venomous. They are generally egg eaters but also eat lizards, frogs and small rodents. And with this report, Oligodon fasciolatus is known to devour poisonous toads from the inside. They have large teeth in the back of their mouths and also have a functional Duvernoy’s gland.

The complete paper, “Eviscerated alive: Novel and macabre feeding strategy in Oligodon fasciolatus (Günther, 1864) eating organs of Duttaphrynus melanostictus (Schneider, 1799) in Thailand” can be read on the Herpetozoa website.