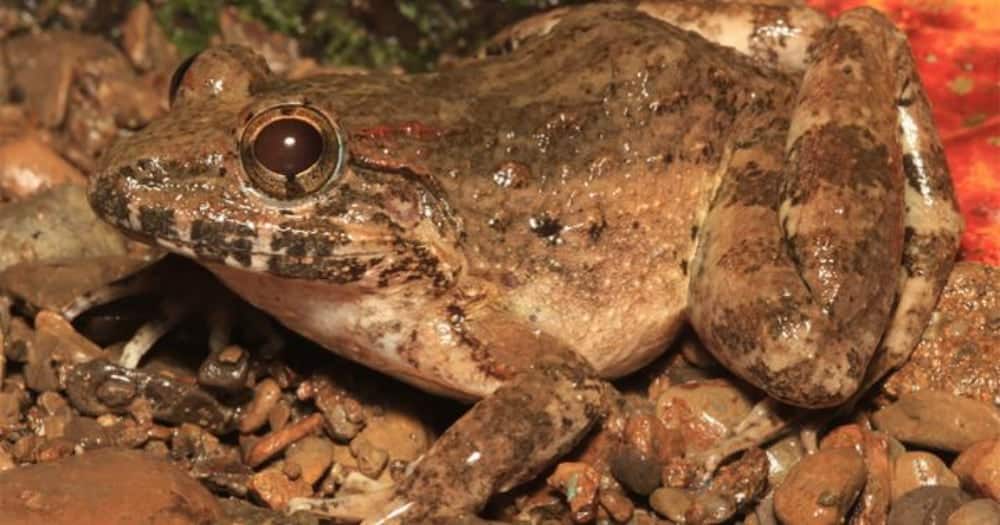 Researchers in the Philippines have discovered a new frog species that was previously thought to be the same species found on another island, but was

Researchers in the Philippines have discovered a new frog species that was previously thought to be the same species found on another island, but was determined to be unique through genetic testing.

The frog, the Mindoro fanged frog (Limnonectes beloncioi) was previously thought to be the Acanth’s fanged frog (Limnonectes acanthi) that lives on Palawan island. It sported nearly identical physical similarities in looks, almost indistinguishable to the naked eye. However, the mating calls were distinctly different and genetic analysis of the frog by researchers with the University of Kansas’ Biodiversity Institute and Natural History Museum and Department of Ecology & Evolutionary Biology, determined that the frog was indeed a different species from the amphibian on Palawan.

“This is what we call a cryptic species because it was hiding in plain sight in front of biologists, for many, many years,” lead author Mark Herr, a doctoral student at the KU Biodiversity Institute and Natural History Museum and Department of Ecology & Evolutionary Biology said in a statement released to the media.

“Scientists for the last 100 years thought that these frogs were just the same species as frogs on a different island in the Philippines because they couldn’t tell them apart physically. We ran a bunch of analyses — and they do indeed look identical to the naked eye — however, they are genetically isolated. We also found differences in their mating calls. They sound quite different. So, it was a case of using acoustics to determine that the species was different, as well as the new genetic information.”

The fangs of the Mindoro fanged frog. Photo via University of Kansas

The researchers believed that the 445 km distance between the island of Mindoro and the island of Palawan was too far for the frogs to be the same species due largely to the different frog calls. Analysis of the frog’s genome determined that the two frogs were indeed separate species.

“We ran genetic analyses of these frogs using some specific genetic markers, and we used a molecular clock model just to get a very basic estimate how long we thought that these frogs may have been separated from one another,” Herr said. “We found they’re related to each other, they are each other’s close relatives, but we found they’d been separate for two to six million years — it’s a really long time for these frogs. And it’s very interesting that they still look so similar but sound different.”

Another interesting aspect to this finding is the researcher who originally identified the Mindoro Island population of the frog, 100 years ago, was Kansas University professor Edward Taylor. Taylor also named the Palawan island frog, the Acanth’s fanged frog, based on the nearly identical look. Back then though there was not any genetic analysis to avail of to determine the difference between the two species.

“Mark’s discovery reinforces a lesson we’ve learned over and over through the years — things we thought we knew, combined with new information, emerge to teach us something completely unexpected,” Brown said. “A century ago, KU professor Edward Taylor identified the Mindoro Island population as Acanth’s Fanged Frog, the same species as he had named, a few years before, from Palawan Island — an arrangement that made very little sense. Zoom forward a hundred years, and we find with new technology, genetic information and bioacoustic data that the two islands’ populations are actually very well-differentiated, as we would expect. But not morphologically; their physical characteristics have not diverged. This is a case in which the formation of species has not been accompanied by morphological differentiation — so called ‘cryptic speciation.'”