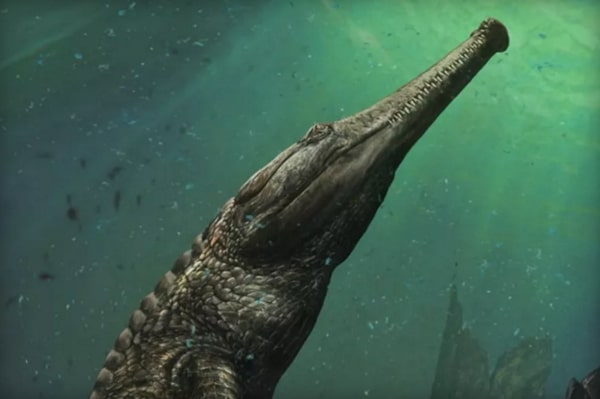 Could Titanoboa take down Machimosaurus rex, a sea dwelling crocodile that was just discovered by scientists in Tunisia? If they lived during the same period of time, that would make for an interesting encounter. The recent discovery came as a surprise not only because it was a saltwater crocodile that lived about 130 million years ago, but by the sheer massiveness of the animal.

According to news reports, it took the scientists two days just to uncover the reptile’s skull, which was more than five feet in length. They estimate the length of Machimosaurus rex to be 30 feet, with a weight of around three tons. That is a big croc.

"Massive. It's just big. It's almost the size of a bus,” University of Bologna's Federico Fanti, lead author of the study, told the Washington Post.  "It definitely was at the top of the food chain at the time, at least in this particular locality."

Fanti told the Post that previous studies of the group of crocodiles point to  "a big global extinction between the Jurassic and Cretaceous periods that wiped out a number of marine reptiles, including this group of reptiles.”

The kicker is that Machimosaurus rex lived long after the hypothesized mass extinction. The finding of this particular fossil leads Fanti to believe that the mass extinction theory is incorrect and science needs to further look into what was occurring during the end of the Jurassic period.