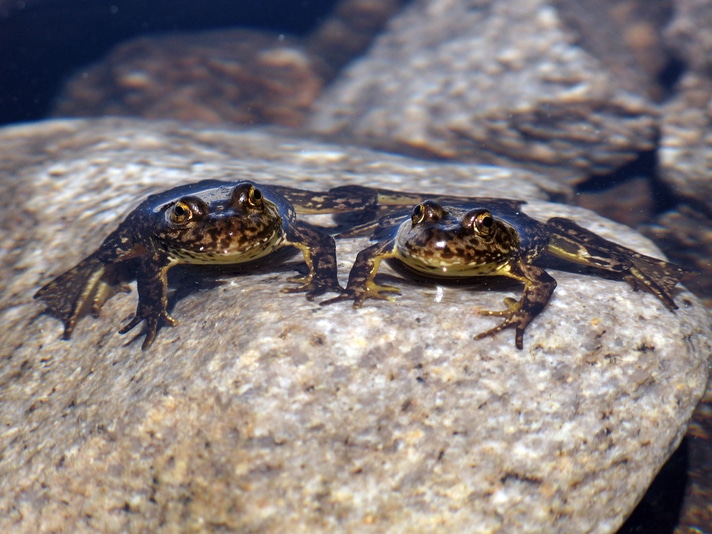 The mountain yellow-legged frog has seen its population numbers crash due to the chytrid fungus.

Researchers with the University of California, Santa Barbara have been trying to find a way to help the mountain yellow-legged frog (Rana muscosa) fight off the chytrid fungus that has devastated amphibian populations around the world. The scientists took several of the frogs and infected them with the deadly disease, but before the disease could kill the frogs, they cured them with an anti-fungal medication. This is all in hopes that the immune systems of the frogs would be better prepared to tackle the fungus when they are released in the wild, because they have already been exposed to the fungus.

“It’s the best chance that we know how to give them,” Roland Knapp, a biologist with UC Santa Barbara told KQED. “I saw the biggest one I’ve ever seen last summer,” he says. “Thousands of dying frogs. Carcasses of frogs all over the place. It was pretty rough to see.”

So far, the frogs are surviving pretty good, so much so that the San Francisco Zoo is also conducting similar immunity treatments for the frogs.

The mountain yellow-legged frogs are found in the alpine lakes of California as well as the San Gabriel Mountains and have been devastated by the chytrid fungus. as well as nonnative trout that used to be planted in the high altitude lakes by airplane. Some estimates put the population of frogs that have been wiped out by the disease and predation at 90 percent. Hopefully, the process of infecting the frogs with the fungus and then curing them before they get too sick will boost their immune systems so they can fight off the fungus without further human intervention.