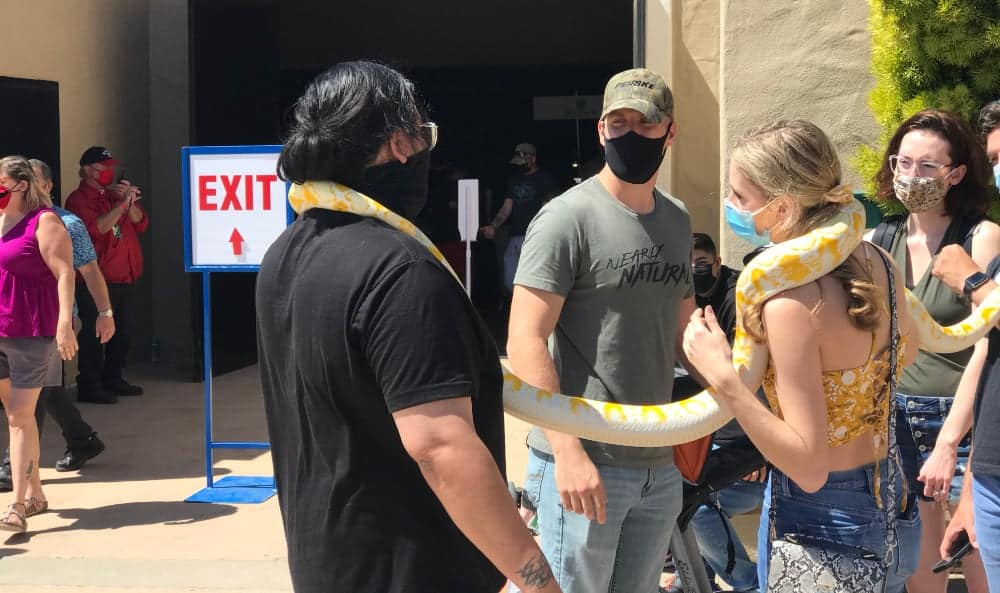 [gtx_gallery] At the Reptilian Nation Expo in San Diego this past weekend, attendance was so large on Saturday, the expo staff had to limit those c

At the Reptilian Nation Expo in San Diego this past weekend, attendance was so large on Saturday, the expo staff had to limit those coming in to the main building to avoid large crowds inside. The line to get in outside was several hundred people deep for several hours, waiting for people to traverse through the small show at the Del Mar Fairgrounds. Unofficial numbers put attendance at well more than 5,000 people for the three day show.

Exhibitors were showing a variety of the most popular reptiles, including bearded dragons, ball pythons and leopard geckos and crested geckos. Other were showcasing more obscure species such as tri-colored hognose snakes, a variety of Anolis species, and even a paradise flying snake.

One show attendee who came to the REPTILES magazine table told us that he had every pullout poster that came with the magazine in the early 2000s and was getting back into reptile keeping, hoping to purchase a new scaly friend at the Del Mar show.

“It’s been a long time since I’ve had a reptile or subscribed and I am excited to get into keeping reptiles again,” Tony Navarro told us as he signed up for the REPTILES newsletter.

Business was so brisk for some vendors that one snake breeder behind our table left early Sunday as he had sold out of his stock. Like bicycles and other fitness equipment, the sale of reptiles has been popular during this once in a lifetime pandemic.

2020 reptile sales up 450 percent for one store in Florida

Big Apple Pet Supply in Delray Beach, FL has seen a surge in snake and gecko sales, according to a report in WPTV.com. Store owner Steven Spitz has been selling reptiles and amphibians for 27 years and said prior to Covid19 hitting, sales were down. “It wasn’t so good, and then Covid hit and boom,” he told WPTV.com. Spitz, who was already selling reptiles via his website, saw a spike in sales.

“The trade shows closed down and everyone went back online to get their reptiles,” Spitz said. He said demand was up 450 percent last year, with sales climbing this year as well.

“This year we are looking at an 850 percent increase. It’s pretty insane,” Spitz said. “We are running out.”

Phil Goss of  the United States Association of Reptile Keepers also noted the surge in sales of reptiles. “I sum it up as people were not taking vacations, so they had to do something with that money,” Goss told WPTV.com.

“What I am observing most is people who were into reptiles as a kid are now coming back and getting reptiles,” Spitz told WPTV.com. “It is great to see the excitement.”