The western pond turtle (Emys marmorata ) in California has been in decline for decades thanks in part to the non-native red-eared slider, but the native turtle does not catch diseases from Trachemys scripta elegans, according to a study published in the journal Diseases of Aquatic Organisms. Scientists have long suspected that disease transmission was occurring from the red-eared slider to the western pond turtle, presumably contributing to the native turtle's decline. So researchers with the California Department of Fish and Wildlife, UC Davis School of Veterinary Medicine, the Hubbs-Seaworld Research Institute, and the U.S. Fish and Wildlife Service set out to determine the extent of disease transmission between the two species. 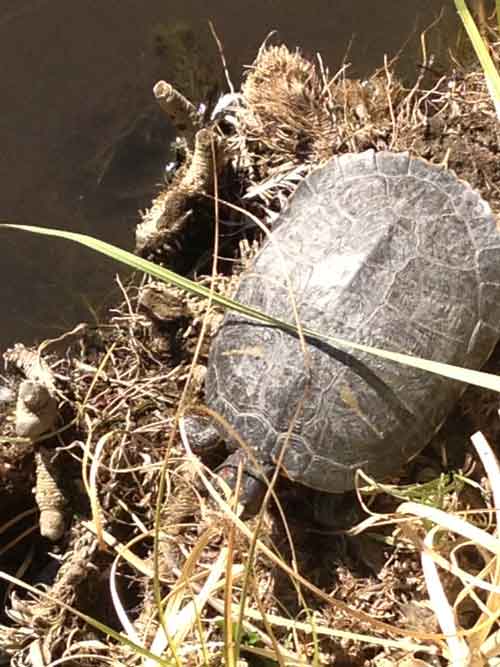 A red-eared slider basking on the banks of a pond in a Huntington Beach, Calif. business park.

The red-eared slider is the most popular turtle in the pet trade, often sold as tiny juveniles only to grow to about a foot in carapace length. The red-eared slider is alos an omnivore, eating aquatic vegetation and animal matter including live and dead fish and other aquatic animals. They are native to the southern United States and northern Mexico, but have a near worldwide distribution due to its popularity as a pet turtle. The red-eared slider is on the International Union for the Conservation of Nature's List of the world's 100 most invasive species, one of two reptiles on the list.