Hope for one of Asia's biggest and rarest freshwater turtles

In a location about 100 miles northeast of Cambodia's capital city of Phnom Pehn, scientists from Conservation International (CI) have partnered with local Buddhist monks from the 100 Pillar Pagoda and the Fisheries Administration (FiA) to set up the Mekong Turtle Conservation Center (MTCC).

The goal of the MTCC is the long-term, sustainable conservation of the wild population of one of the world's rarest and biggest freshwater turtles – the Cantor's softshell turtle, (Pelochelys cantorii). The largest group in the wild survives in the nearby Mekong River.

Cantor's softshell turtle can grow to more than four feet in length, and may weigh more than 100 lbs. This endangered species is almost extinct in Laos, Thailand, and Vietnam, but its rediscovery in the Kratie province of central Cambodia during 2007 offered new hope for its survival.

The MTCC has been built in the grounds of ancient 100 Pillar Pagoda in Kratie province, and is fully supported and co-funded by the monks that still use this site. Developed about 1529, the area is already a popular tourist destination and well-known throughout Cambodia.

The outdoor protected pond, formerly a traditional pagoda pond, was reconstructed and converted for the MTCC. This pond will be populated with mature turtles, donated by local fishermen, to establish an assurance colony of fertile adults and to facilitate captive breeding, for which an adjoining sandbar for nesting was built.

Today, Cantor's softshell turtle is nationally protected in Cambodia and listed by the International Union for Conservation of Nature (IUCN) as 'Endangered' (and is currently under consideration for up-listing to 'Critically Endangered' status). Identified threats to the turtle's conservation are fishing for sale into the wildlife trade and the raiding of nests for consumption by locals, as well as increased gold mining in the vicinity of the nest protection sites and the grazing of buffalo in the area, leading to nest and habitat damage. 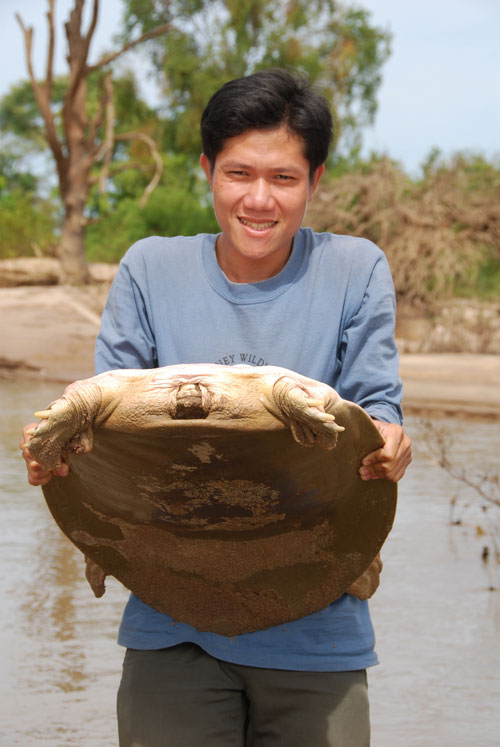 A mature Cantor's softshell turtle, donated to the Conservational International project for this species.

The MTCC is designed primarily to headstart turtle hatchlings – growing them on to a larger size for release, thereby hopefully ensuring more survive, and boosting the overall population. But there is a key educational role too. The Center is seeking to generate revenue to sustain the project and support the neighboring community with its role as an ecotourism attraction and education center for turtle conservation.

It aims to teach Cambodians and tourists about the importance of turtle conservation, and the links between healthy ecosystems and healthy communities. Other native species will be kept at the facility to help incentivize tourism, and all entry cost proceeds will go toward the project and flow into the local community, so as to improve people's livelihoods in the area.

The MTCC is the latest development in Conservation International's Cantor's turtle conservation work, following the successful and ongoing community-led "nest protection program" which started in 2007. This offers monetary incentives to villagers who discover nests, and protect them while the eggs incubate. Since the project began more than four years ago, in excess of 1,000 turtles have hatched successfully – with more than 300 hatching during the 2010-2011 nesting period alone.