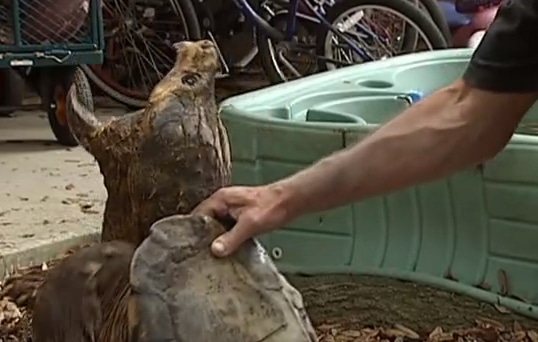 Turtle was stuck in a Louisiana culvert when it was rescued.

An alligator snapping turtle (Macrochelys temminckii) that got itself wedged in a culvert in Louisiana was rescued by two men after one noticed something in the culvert near his driveway. Baton Rouge resident Travis Lewis first thought the turtle was a log but when he took a closer look he realized it was a turtle wedged up against the culvert wall, according to WAFB News.

Another friend climbed down into the culvert and spent 45 minutes freeing the turtle from the confines of the culvert. Lewis's friend Martin LeBlanc, who is from Pierre Part, Louisiana first thought, "dinner" but then decided against it. The news report said that they would set it free once they found a spot that was large enough for it.

Alligator snapping turtles are the largest freshwater turtles based on weight. They are native to the southeastern United States, living in bodies of water that offer ample prey items, such as fish and dead fish, snakes, crayfish, aquatic plants and other turtles. They are considered endangered in Kentucky, Indiana, Illinois, and Missouri where they are protected by state law.